Carpiquet in 1944 – Calvados – Battle of Normandy

The commune of Carpiquet located to the west of Caen has an airfield which represents a major objective for the Allies. This aerodrome was already used by the French before the war and was occupied by the Germans. It is initially composed of a cement track 1,800 meters long.

On April 29, 1941, the Normans Jean Hébert and Denys Boudard succeeded in capturing a German plane Bücker Jungmann and then landed in the United Kingdom, joining the ranks of the Free France army.

Carpiquet and his airfield had to pass under the control of the Allied soldiers as early as June 6, 1944. But on D-Day, the soldiers landed on the beaches took a long delay at the start of the action, and the German soldiers took the opportunity to install a Solid defensive line aimed at prohibiting access to the city of Caen.

Carpiquet remained for almost a month in the hands of the German SS 12. Panzer-Division commanded by Oberführer Kurt Meyer, which gave them time to set up formidable fighting posts despite the permanent allied bombing, Which oblige the “Panzer” to bribe. The 3rd company of S.S. Panzergrenadier-Regiment 26 (reinforced by the 1st section of the 1st company) is in position west of Carpiquet. Elements of the 4th company are banned in the east. The staff of the 1st Battalion and the other elements of the regiment are located south of the aerodrome, taking advantage of the defensive facilities of the aerodrome set up before the start of the Battle of Normandy. The infantry is supported by tanks of the SS Panzer-Regiment 12 (five Panzer IV tanks of the 9th Squadron commanded by the Obersturmfürher Buettner) located to the southeast of the aerodrome and having a complete view of the whole of the site. The gunners of the 3rd regiment of the S.S. Panzerartillerie-Regiment 12 also support the defense of the sector.

General Montgomery, commander of the allied land forces in Normandy, is considering a first operation to capture Carpiquet: Operation Ottawa, part of Operation Epsom launched on June 26, 1944. Due to the losses Encountered during Epsom, Ottawa is canceled. It was not until July 4 and the launch of Operation Windsor to see the situation evolve.

Operation Windsor is preceded by a large artillery preparation delivered by the 21 field batteries composed of 248 tubes of different calibres as well as the 408 mm and 380 mm pieces embarked on board the British battleships HMS Rodney and HMS Roberts in Manche . A first disappointment attack by the Royal Winnipeg is launched on July 4th at 5 am in the direction of the airfield hangars at the airport. At the same time, the Canadians of the La Chaudière and North Shore Regiment (8th Infantry Brigade) mounted an assault on the commune of Carpiquet. The tanks of the Sherbooke Fusiliers (2nd Armored Brigade) manage to cross the minefields north of Carpiquet but meet a fierce defense of the soldiers S.S. who also take under their fire the North Shore Regiment. The Canadians, supported by the tanks of the 10th Armored Horse Fort Garry Horse (2nd Armored Brigade), entered Carpiquet at 6:32 am where violent street fights began against the S.S. of 12.S. Panzer-Division. Shortly after 08.30, the Allies seized the municipality and then concentrated their efforts on the aerodrome.

The Royal Winnipeg Rifles is relaunching its offensive, this time aiming at capturing hangars and airfields, but Canadians have to overcome the great discovery that separates them from German positions. They suffered heavy casualties: several Sherman tanks were destroyed and, while they were halfway through the hangars, the Canadians fell back to their point of departure. No report goes back to General Keller who is convinced that everything works according to the plan originally planned: the front forms a salient that is unfavorable to the Allies, but the Germans remain in a defensive position and do not exploit the temporary withdrawal of the Canadians . In Carpiquet, the men of the 8th Infantry Brigade installed their defensive positions in anticipation of possible counter-attacks. They are located at 1600 meters from the first houses of Caen and represent a very important threat for the German forces: the latter concentrated their defense north of the capital of Calvados and the presence of the Canadian soldiers on their left flank is largely unfavorable. Allied forces are likely to use their off-centered Carpiquet bridgehead to bring down the German lines of defense.

Early in the afternoon, the Royal Winnipeg relaunched its offensive towards the airfield, supported this time by two squadrons of Typhoon aircraft which set out to hunt German tanks and guns. They managed to reach the hangars north of the airfield but the SS of the 12th Panzer did not bend and launched several counter-attacks with their tanks from the hangars to the south: again, Canadians were forced to withdraw to their point Despite the intervention of their aviation. The Allies lost thirteen tanks during the first day of Operation Windsor.

On the night of 4 to 5 July 1944, Kurt Meyer prepared the German counter-offensive to take over the commune of Carpiquet, which he said was essential to the defense of Caen. Its troops are ready to pierce the front line from the village of Francqueville and they gather all necessary support in armored, artillery, mortars, heavy machine guns. Shortly after midnight, on July 5, the counter-attack began. The defense of Carpiquet holds good against this German offensive: the fighting continues throughout the night and until dawn. The Germans launched no fewer than three attacks, all of which failed and their losses were high. They still maintain pressure through mortar and rocket launches during the day, but Canadian defenses are holding up.

All night, the Germans renewed their offensive against the North Shore regiment with the support of their artillery. The Canadians, once again, do not back down and their opponents are set by powerful shots. On the dawn of July 6, 1944, the SS soldiers, supported by tanks, launched a large offensive against the positions held by the La Chaudière regiment. The Canadian infantry must retreat while awaiting the salvific support of the Sherman tanks which allows it to regain its initial line of defense.

The aerodrome fell completely and definitively in the hands of Canadians on Sunday, July 9, 1944, following Operation Charnwood (launched by the 3rd Canadian Infantry Division the previous day) to take control of Caen from north and west . Following a massive bombardment of 450 Royal Air Force aircraft, the La Chaudière regiment took the last hangars south of the airfield while the infantry of the Queen’s Own Rifles of Canada seized the barracks.

Starting July 13, 1944, the sappers of the 24th Airfield Construction Group installed a track covered with PSP plates crossed with the cemented track to be repaired. Work on the ALG B-17 aerodrome by the Allies ends on 8 August 1944. 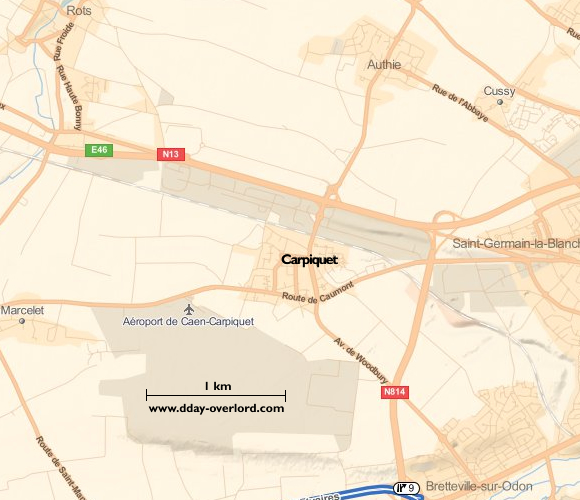