Carquebut in 1944 – Manche – Battle of Normandy

The village of Carquebut was occupied in the spring of 1944 by the German soldiers of the Grenadier-Regiment 1058 (91. Infanterie Division).

On June 6, 1944, paratroopers of the 507th and 508th Parachute Infantry Regiments commanded by Captain Roy E. Creek held the bridge at Chef-du-Pont but were shot by the Germans in Carquebut.

On June 7, a reconnaissance of the village of Carquebut was carried out by the 3rd Battalion of the 325th Glider Infantry Regiment (which is in fact formed by soldiers of the 2nd Battalion of the 401st Glider Infantry Regiment): the town was deserted, the Germans had already withdrawn West of the river Merderet. However, the airborne soldiers do not stop there and continue in the direction of Chef-du-Pont.

On June 8, the 3rd battalion of the 508th PIR, commanded by Lieutenant-Colonel Louis G. Mendez Jr., ordered two of its patrol companies between Chef-du-Pont, Le Port, Carquebut and Les Forges. In total, 135 German soldiers are taken prisoner in the area which is finally secured without losses on the evening of 8 June.

A temporary cemetery is set up by the Americans in Carquebut, near Donville. The local civilian population assists the Allies in the burial. Initially, the bodies are buried in simple parachutes and then in mortuary bags. The distance from the front line then allows the burial in coffins. The first bodies were thus unearthed in order to be placed in wooden coffins. 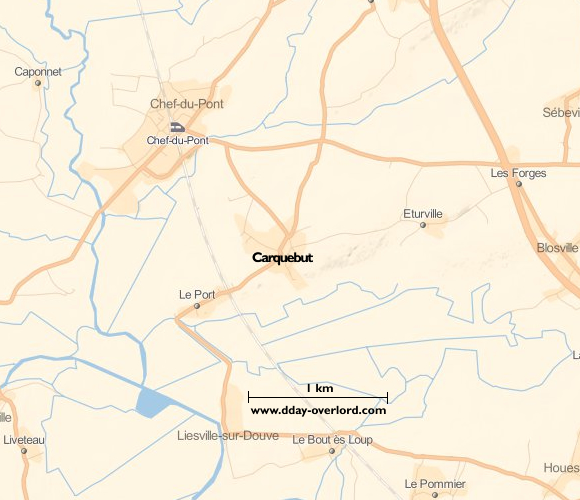