During the Battle of Normandy and the setting up of a large trap in which the Allies hoped to capture several hundred thousand Germans, the Americans plan to close this pocket north of Sées. On August 11, 1944, the soldiers of the 2nd French Armored Division under General Leclerc were ordered to seize Carrouges while recognizing part of the forest of Ecouves. At the same time, the Germans want to counter-attack from this sector in the direction of Le Mans, but given that the general axis of the offensive of the XV American Corps is oriented towards Argentan to the east of the forest of Ecouves, The counter-attack led by General der Panzertruppen Heinrich Eberbach, commander of the 5. Panzerarmee, is reoriented towards the east in order to strike the left flank of the American divisions. The start of the German operation is scheduled for 12 August.

On August 13, 1944, at 9 am, the men of the 4th squadron of the 12th regiment of Cuirassiers (belonging to the CCD, Combat Command Dio) set out for Carrouges, forming the vanguard of the battle group, and destroyed several German vehicles belonging to the 2. Panzer-Division during the progression. The Sherman tank christened “Lille” of Second Lieutenant Michel Pity, commanding the 1st platoon of the 4th squadron, takes the lead in Carrouges from the south starting at noon. After intense fighting that lasted until mid-afternoon and saw the intervention of tank fighters from the Armored Regiment of Marinesmen, the squadron made a prisoner, in particular, a German parachutist lieutenant-colonel. The second squadron settles 1.5 kilometers east of Carrouges, covering the right flank of the regiment which installs its bivouac for the night. At 6 pm, an enemy patrol is pushed back to this location, 10 German soldiers are taken prisoner. Two hours later, the regiment’s staff arrived at Carrouges and then reached the site of the bivouac.

The following day, 14 August, reconnoiteres were deployed from Carrouges to the north and then the battle group Dio left the commune at the dawn of 15 August. 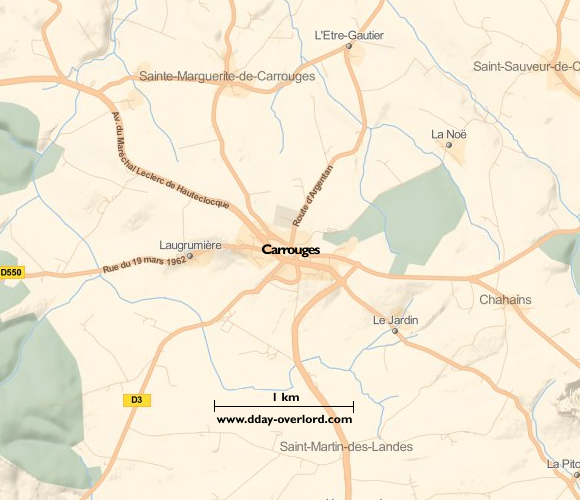