In mid-August 1944, Anglo-Canadians wanted to exploit the results of Operation Totalize, and General Crerar, commander of the newly formed Canadian 1st Army, was looking into the tactical possibilities of breaking through the German lines of defense and reaching Falaise, Trun and then Chambois at the earliest. This new ground offensive is called Operation Tractable. On August 18, 1944, when the Canadian soldiers secured the Trun commune, the Poles of the 1st Armored Division (1 Dywizja Pancerna) under the orders of General Stanislaw Maczek progressed towards Chambois to close the trap exit, where 110,000 Germans are still encircled. Every hour, hundreds of them manage to extricate themselves from this “cauldron” and head towards the Seine to the east: it is necessary to do as quickly as possible to prevent the German armies from reorganizing.

At the same time, south of the commune of Chambois, American soldiers of the 90th Infantry Division commanded by Brigadier General William G. Weaver progressed north to close the trap at the same location. After the Canadians captured Saint-Lambert-sur-Dive on the morning of August 19, 1944, the Poles launched an assault in the direction of Chambois at noon: the 10th regiment of chasseurs à cheval took position at the beginning of ‘Afternoon on the heights of Hill 111, located north-west of Chambois. It was soon reinforced by the 1st Armored Regiment, commanded by Lieutenant-Colonel A. Stefanewicz, who from his position opened fire and destroyed several German elements. General Maczek then gave the order of movement to the 10th regiment of dragoons of Commander W. Zgorzelski and the 24th Lancers Regiment in order to seize Chambois by skirting the 111 mark by the east. The ruins of the city are occupied by hundreds of routed German soldiers, coming from different mixed units.

The Poles reached the eastern outskirts of Chambois, where they joined the Americans of the 359th Infantry Regiment (90th Infantry Division) commanded by Colonel Robert L. Bacon. The “Pocket of Falaise” is now closed and the fighting for the release of Chambois really begin against the German elements belonging to the 116. Panzer-Division as well as to 5. Armee and 7. Armee who want to force the passage to retreat Towards the Seine. Generaloberst Paul Hausser, commander of the forces trapped, ordered a new offensive on the evening of 20 August, but this one is doomed to failure, crashing against the Polish lines. The Allies also multiply artillery fire and air raids on German troops trapped. On the same day, the commune of Chambois was finally liberated by the Poles, but it was badly damaged by the successive bombardments. 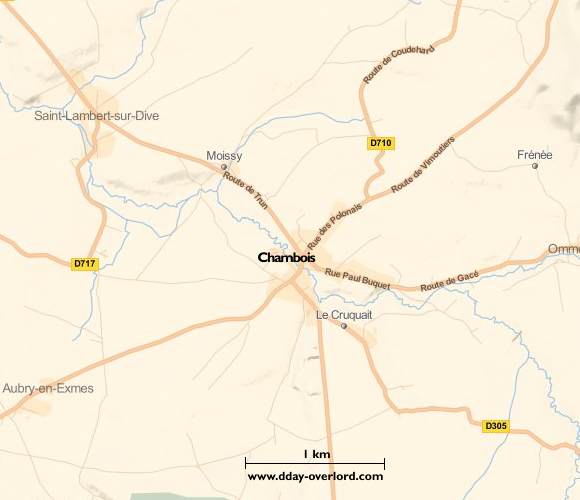