During the war, the commune of Colleville-Montgomery is known as Colleville-sur-Orne. The locality which is located at the edge of the sea is called Colleville-Plage. In 1946, Colleville-sur-Orne was renamed as a tribute to General Bernard Montgomery, commander of the allied land forces during the Battle of Normandy, especially since there is a nearby place name in the Calvados: “Montgommery” with two “m”. The two towns “sur-Mer” and “sur-Orne” are gathered in one and the same locality.

During the period of the Occupation, the Germans installed a fortified position of artillery at Colleville-sur-Orne as early as 1942, which was coded “Wn 16”. Confided in 1944 to the 2nd battery of the Artillery-Regiment 1716 (716. Infanterie-Division), it is armed by four horseshoe guns of 10 cm theFH14/19 of Czech origin still equipped with their lookout. These parts are placed under Regelbau H669 casemates. The battery site, coded “Morris” by the British (the latter nicknamed all German batteries in their area of ​​responsibility by English car brands) is remotely controlled from the Grenadier-Regiment 736 command post headed By the Oberst Ludwig Krug and located at the Hillman position (Wn 17).

On June 6, 1944, after the landing at Sword Beach, the 1st Battalion Suffolk Regiment (8th Infantry Brigade) commanded by Lieutenant-Colonel R. E. Goodwin pulled out of the beach and advanced towards Colleville-sur-Orne. He seizes Wn 19, which serves as a cantonment for the 3rd Company of the Ost Battalion 642 (716. Infantry Division).

The position “Morris” falls at first but the soldiers of the 1st Suffolk fail to maintain the same momentum to reach the position “Hillman” which causes them to waste a lot of time. The Wn 17 “Hillman”, located to the south of the commune, offer a formidable resistance and the English suffer many losses. At the same time, No. 4 and No. 6 Commandos of the 1st Special Service Brigade commanded by Lord Lovat crossed Colleville-sur-Mer and Colleville-sur-Orne and then headed towards Saint- Aubin-d’Arquenay then Bénouville to reinforce the positions held by the British paratroopers since the early hours of June 6, 1944. They awaited the support of the tanks of the 13th/18th Royal Hussars (27th Armored Brigade) and 22nd Dragoons (attached to the 3rd Infantry Division) to begin a double bypass by grabbing the Grenadier-Regiment 736 by the flanks. Private J. R. Hunter of Company A of 1st Suffolk seizes by his own a German machine gun that fixed the rest of his unit. For this action, it is decorated with the Distinguished Conduct Medal. At 10 pm, the British took over the Hillman position.

Immediately after landing on Sword Beach, the 1st Special Service Brigade (1st SSB commandos, commanded by Lord Lovat and attached to the 3rd Infantry Division) headed for the eastern shore of the Orne River to reinforce the positions held by the paratroopers and glider troops since the early hours of 6 June 1944. 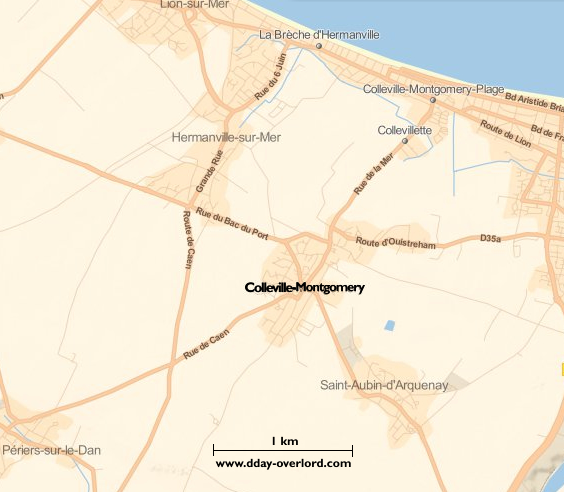