The municipality of Colombelles in the Calvados is located northeast of Caen on a land movement dominating the region and benefited before the Second World War from an industrial development thanks to the implantation of the Société Métallurgique de Normandie (SMN, in English “Normandy Metallurgical Society”). Colombelles hosts the command post of the second battalion of the Panzergrenadier-Regiment 125 commanded by the Hauptmann Kuron and belonging to the 21. Panzer-Division. Two other command posts are also located: the 8th company of the Oberleutnant Laber and the 10th company, which is equipped, in particular, with four modified and S307 (f) coded Somua half-tracked vehicles.

On the night of June 5-6, 1944, the paratroopers of the 6th British Airborne Division were dropped to the northeast of Colombelles. One of the planes carrying a stick of the 8th Battalion Parachute Regiment (3rd Para Brigade), the DC3 registered KG 429 belonging to the No. 46 Group of the Royal Air Force Transport Command, crashed in the area of ​​the commune near Saint-Martin church, touched by a cannon of the anti-aircraft defense located at the level of the shipyards. There is only one survivor of the 19 paratroopers and 4 crew members: the soldiers killed are buried in a common grave near the church [they have been resting in the Ranville military cemetery since 1952].

The British of the 3rd Infantry Division must seize Colombelles on June 6th, but the long delay on the beach does not allow them to meet deadlines. The Germans took advantage of the situation and reinforced their line of defense on D-Day, especially with soldiers belonging to the Luftwaffen-Jäger Regiment 32 of the 16. Feld-Division (L). They are gradually reinforced by elements of the Schwere Panzer-Abteilung 503 equipped with the first tanks Tiger II deployed during the battle of Normandy. During the weeks that follow, the front does not evolve. Colombelles was subjected to regular bombing and the Germans gradually evacuated the village in order to prepare its defense. The metallurgical plant, subjected to air strikes and regular artillery strikes, is no more than a vast field of ruins, but it allows the elements of observation to request and then to correct artillery fire in the North of Caen.

On July 9, 1944, after the cessation of Operation Charnwood north of Caen, the Germans reinforced their positions and in particular Colombelles. General Montgomery, commanding the 21st Army Group, then ordered the destruction of the factory chimneys, used by German artillery observers: this operation was called Operation Stack. On the night of July 10-11, the 153rd Infantry Brigade, consisting of the 5th Battalion The Black Watch, 1st Battalion The Gordon Highlanders and 5/7th Battalion The Gordon Highlanders, launched an attack on positions defended by the Schwere Panzer-Abteilung 503. Infantry is supported by the Sherman and Firefly tanks of the 148th Royal Armored Corps (RAC). The British soldiers were quickly fixed by heavy bombardments of mortars and Nebelwerfer of the Werfer Regiment 54. The tanks of the 3rd squadron under the command of the Oberleutnant Richard Freiherr von Rose (the unit commander, Hauptmann Scherf, replaced Temporarily the corps commander, sick) counterattack at dawn and destroy 9 of the 10 Shermans of Squadron A of the 148th RAC. Three other armored vehicles were put out of action and the Germans captured two Shermans: one of them was later used as a tow truck for the benefit of the regiment. The 153rd Infantry Brigade retreated, abandoning the hope of achieving the goals of Operation Stack.

On 18 July, the Allies launched Operation Atlantic (Canadian part of Operation Goodwood), which also aimed at seizing Caen. The offensive began with a massive bombardment that destroyed the vast majority of German positions. The Canadians of the 8th Infantry Brigade launched an assault at 7:45 am The right flank was taken into account by the La Chaudière regiment, which was advancing along the Orne River. The Queen’s Own Rifles of Canada was positioned on the Left flank and the North Shore Regiment is located in the center, in the second rung. The men of La Chaudière are supported by squadron C of the 1st Hussars (2nd Armored Brigade) and those of the Queen’s Own Rifles by squadron B. The Canadians of La Chaudière are welcomed by a heavy fire from the castle of Colombelles and the Ruins of the metallurgical factory, they are quickly fixed.

For its part, company A of the Queen’s Own Rifles under the orders of Major Hume Elliot Dalton progresses through the ruins of the municipality of Colombelles. The regiment is slowed by the capture of many soldiers of the Luftwaffen-Jäger Regiment 32: sections are under fire from German snipers who take advantage of the chaos of the ruins of the metallurgical factory to apply fires without being spotted. Companies C and D of the Queen’s Own Rifles bypass the east and head for Giberville. To the south of the metallurgical plant, company A is engaged in a violent battle: all the section chiefs of the company are killed. Many soldiers are killed and wounded during this engagement.

Around 11 am, the La Chaudière regiment failed to dislodge its opponents: the North Shore is engaged and must make its way through the positions of the units of the first echelon, creating a terrible disorder. The Stormont, Dundas & Glengarry Highlanders (9th Infantry Brigade), which was supposed to advance towards Vaucelles (southwestern suburb of Caen) without causing a disturbance to the Canadiens, is now in its turn. At noon, General Keller, commanding the 3rd Infantry Division, demanded aerial support against the position of the castle which continues to fix La Chaudiere, but the bombardment had no effect. At 1440 hours a flood of allied shells fell on the castle. Believing the fire was over, sections of the Stormont, Dundas & Glengarry Highlanders regained momentum, but firing resumed and casualties were high, especially in the ranks. officers. The regiment takes a long time to recover from this shock. The cannons stop the neutralization shot at 1518 and the La Chaudière regiment is no longer fixed and can advance again: the Canadians continue the fight in the area of ​​the castle and penetrate north of Colombelles. The regiment lost 25 soldiers and 75 wounded. The men of Stormont, Dundas & Glengarry Highlanders have to cross an open-fire area before reaching the houses to the east of the village: blocked by German machine gun fire, soldiers hesitate. But the orders are to reach Colombelles, whatever the cost in human lives. The lack of armored support is becoming more and more serious and the gaping holes created by the artillery shells greatly hamper progress. However, the target is reached around 5 pm and the Allies finally hold the commune, although several Germans remain camouflaged in the ruins of the village.

The North Shore Regiment, bypassing the castle’s resistance point and Columbelles dwellings by the east, progresses through the ruins of the metallurgical factory and has to face the punctual resistance of formidable German soldiers, camouflaged in the rubble. The fighting continues all night, soldiers on both sides are covered with a heavy layer of dust. To the south-west of Colombelles, the Stormont, Dundas & Glengarry Highlanders managed to pull themselves out of the plant area and settled down at night. The last German defenders of Colombelles and of its metallurgical factory are neutralized or captured at the following daybreak.

Fully liberated from the German occupation on July 19, 1944, the municipality of Colombelles is destroyed to 80% by the numerous bombings. The rubble of the metallurgical factory continues to burn several days after the end of the fighting. 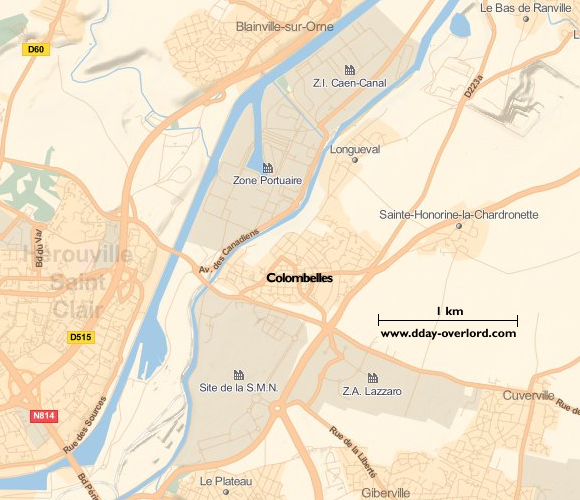