Courseulles-sur-Mer in 1944 – Calvados – Battle of Normandy

The village of Courseulles-sur-Mer is defended by a large anti-tank wall and German strongpoints coded Wn 29 and Wn 30, with soldiers of the 2nd Battalion of the Grenadier-Regiment 736, (716. Infanterie-Division). The Wn 29 is powerfully armed with one 88 mm gun, one 75 mm gun and a 50 mm anti-tank gun. The Wn 30, defends the southern accesses of the locality in front of Graye-sur-Mer and is surrounded by a network of trenches.

The Canadians of the 3rd Infantry Division are responsible for disembarking on Juno Beach on D-Day. The 7th brigade, in particular, receives “Mike” and “Nan Green” beach areas and two of its regiments are responsible for seizing Courseulles-sur-Mer: the Royal Winnipeg Rifles and the Regina Rifles Regiment.

The assault on Courseulles-sur-Mer is preceded, as on the other beaches of the invasion, by an aerial bombardment and then by a naval bombardment two hours before the landing which is scheduled for 7.35 am At the dawn of June 6, 1944, the sea in front of Juno was extremely rough and the Canadians landed ten minutes behind schedule. Moreover, the bombing was ineffective and both the anti-tank wall and the German defenses are still in place.

The Canadians are set before they even set foot on Juno Beach. The losses are very high in the first minutes of the assault and the situation deteriorates rapidly. Shortly after 8 o’clock, the first elements of Company A of the Royal Winnipeg Rifles succeeded in crossing the anti-tank wall under enemy machine-gun fire and gradually seizing defense posts along the beach.

Starting at 8:35 am, Companies C and D of the Regina Rifles Regiment landed on “Nan Green” and stormed the town of Courseulles. The landing of the amphibious Duplex Drive tanks of the 6th Canadian Armored Regiment (1st Hussars) squadron B increases the firepower of Canadians: the Wn 29 is progressively disarmed with direct fire from tanks Canadian.

To the west of Courseulles, the Royal Winnipeg Rifles faced considerable resistance, especially as it was under the fire of another German base in Graye-sur-Mer, Wn 31. Many snipers greatly hamper progress in the locality. The whole of Courseulles-sur-Mer is under Canadian control at the end of the afternoon.

During the Battle of Normandy, many senior officers and allied politicians went through Courseulles-sur-Mer to visit the front. This is the case of General Montgomery, who landed on June 8 and 12, 1944, Field Marshal Jan Christiaan Smuts, Prime Minister of the Union of South Africa, on June 12, English Prime Minister Winston Churchill on June 12 As well as General de Gaulle on 14 June. 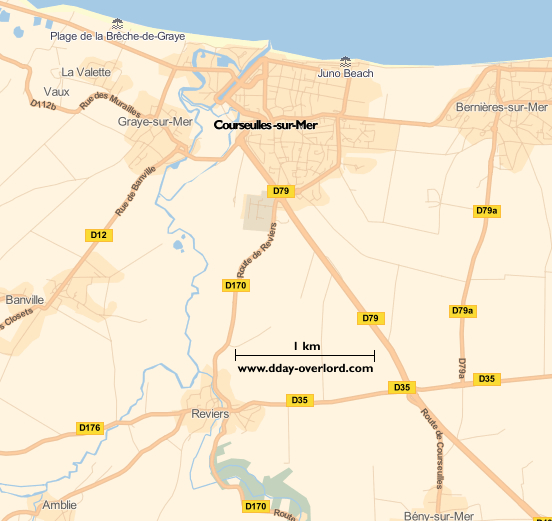