Ecausseville in 1944 – Manche – Battle of Normandy

During the Occupation, the Germans settled in June 1940 in the town of Ecausseville, particularly interested in the former base of the French Navy and its hangar with airship shed in metal structure. They store the 155 mm guns belonging to two batteries and place positions for machine guns as well as a battery of 88 mm guns for the defense of the site.

As of June 8, 1944, Americans belonging to the 8th Infantry Regiment (4th Infantry Division) supported by tanks of C Squadron of the 70th Tank Battalion began the siege of the site and the village of Ecausseville. They are opposed to the German soldiers of Grenadier-Regiment 922, (243. Infanterie-Division) and Sturm-Battalion AOK 7, (709. Infantry-Division). On June 9, the hangar area (southwest of Ecausseville) was attacked by the 3rd Battalion of the 8th Infantry Regiment under the command of Lieutenant-Colonel Erasmus H. Strickland. Large discovered around the hangar and manage to reach a cover to the north of the position despite heavy losses. They are then taken from the hamlet of La Lande, about 300 meters to the north. Company I (commanded by Captain Frederick C. Maisel, Jr), isolated from the rest of the battalion, was reinforced two hours later by company L (commanded by Captain John Reckord) who also fought hard to reach hangar. 1st Lieutenant Lyle P. Camony’s company K also accessed the contact line.

The 1st Battalion attacks on the right flank of the regiment but it is fixed at the same height as the third battalion. At 2 pm, Colonel James A. Van Fleet commanding the 8th Infantry Regiment hired the 2nd battalion in battle at the center of his line in the direction of the town of Ecausseville: Captain Howard Lees’ company E Is taken under heavy fire from machine guns and artillery shells. A position of German machine-gun takes in line the company which registers heavy losses; The enemy artillery fired precise shots that destroyed a mortar and two heavy machine guns belonging to the company H. 14 soldiers of the first section seeking to avoid the enemy fire deport themselves towards the east and then involuntarily establish the connection with the elements of the 1st battalion: it is then decided that they will rejoin their unit only later to avoid any additional disorder. The men of company E folded for nearly 400 meters: they lost about sixty of theirs, all their mortars and half of their heavy machine-guns. At 5:30 pm, the 2nd Battalion was ordered to retreat to a new area in order to re-articulate.

At 7 pm, Lieutenant-Colonel Conrad C. Simmons’s 1st Battalion was advancing from Magneville east of Ecausseville behind two tank squadrons of Squadron A of the 70th Tank Battalion progressing along National Highway 13. During 15 minutes, exchanges of fire between the tanks and the German positions in the village. 88 mm guns fire back, forcing the tanks to retreat immediately. On their way to their lines, the tanks invaded the Petit-Bourg place, which is located 400 meters northeast of Ecausseville and is still occupied by the enemy: at the same time, company A du Captain Carl Cline conquers the place by a violent assault. The Americans make about a hundred prisoners there.

At 2100 hours, the three battalions set up in prohibition facing the north for the night. The Germans decided to abandon Ecausseville in favor of the darkness, having lost the area of the hangar on their right flank and the locality of the Petit Bourg on their left flank. On the morning of June 10, 1944, the 8th Infantry Regiment relaunched its offensive with Lieutenant-Colonel Carlton O. MacNeely’s 2nd Battalion in the center, headed straight for Ecausseville, which the Americans discovered abandoned. They seize the village and then continue their progression towards Montebourg.

After the capture of Ecausseville, the Americans use the site of the former base of the French Navy as a logistic center. Many vehicles are parked there as well as fuel reserves or large quantities of tires. At the end of the war, many materials were left by the Americans and recovered by the local population. 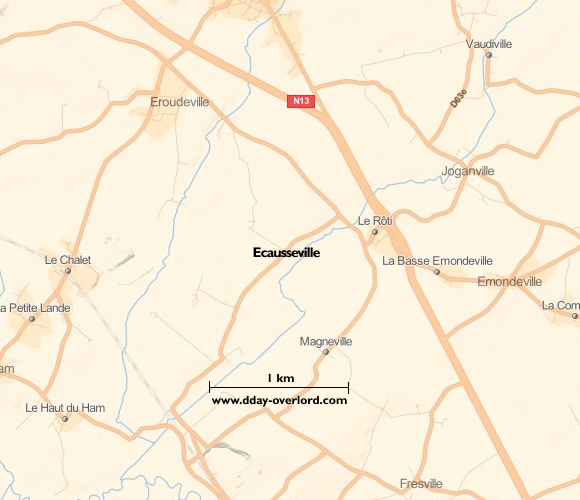