History of the Ecausseville airship shed in Normandy 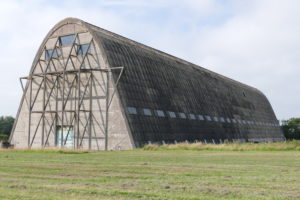 The remains of the airship hangar at Ecausseville in Normandy.
Photo (2018): DR

During the First World War, a base of the Navy hosted a unit of airships on the territory of the town of Ecausseville. It included a wooden shed from which the airships went on patrol along the Channel coast. In 1917, the construction of a new airship hangar began, this time in metal structure, covered with 3,552 reinforced concrete tiles. This military base ceased its activities in the 1930s in the face of the rise of reconnaissance aircraft that gradually replaced airships. In 1933, the wooden shed was demolished. 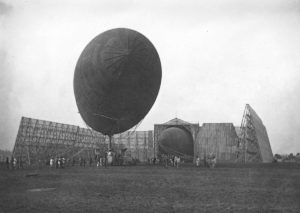 In spite of the disappearance of the airships, the imposing metal hangar is preserved by the French army which uses its non-standard dimensions for the storage of military equipment: with a length of 150 meters, it occupies a surface area of 6 000 m² and is 31 meters high.

During the occupation, the Germans settled in June 1940 in the town of Ecausseville, and in turn stocked war equipment in the hangar, including 155 mm guns belonging to two batteries. They update the site’s defense plan, placing machine gun positions and a 88mm anti-aircraft guns battery. 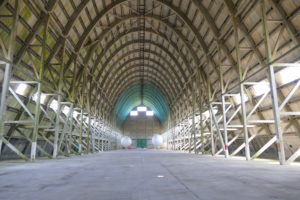 When the Battle of Normandy begins June 6, 1944, US troops seek to seize the military site, defended by the Germans Grenadier-Regiment 922 (243. Infantry Division) and Sturm-Battalion AOK 7 (709. Infantry -Division). On the afternoon of June 9, 1944, the Americans of the 8th Infantry Regiment (4th US Infantry Regiment) supported tanks of the C Squadron 70th Tank Battalion reach Ecausseville and observe the shed that stands out clearly from the line of horizon. Companion I of the 3rd Battalion of the 8th Infantry Regiment engages in the great discovery around the site and is caught under a violent fire that forces them to reach a cover north of the position, suffering heavy losses. The company L under Captain John Reckord relaunched the action, backed by Captain John Spangler’s company K: the Americans managed in the early evening to repel the last defenders outside the base of the hangar, firing even within the metal construction. The Germans finally give up all hope of getting back on the site and decide to re-articulate themselves on a new line of defense further south, in favor of the night. 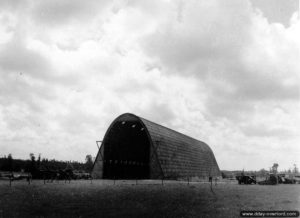 After the fighting, the Americans in turn occupy the site of the former French Navy base and use it successively as a prison camp and then as a logistics center. Many vehicles are parked there as well as fuel reserves or large quantities of tires, under the responsibility of the 860th Ordonance Company (105th Ordnance Battalion). Many graffiti on the walls still testify to the presence of its various occupants in the course of history. At the end of the war, many materials are left by the Americans and recovered by the local population.

From 1967 to 1969, the DAMCEA (military applications department of the Atomic Energy Commission) used the hangar to perform a series of secret tests on new balloons. These studies were aimed at validating maintenance, communication and power supply systems for balloons used during the testing of the first French H-bombs. The Navy definitively abandons this base in 1994, whose remaining infrastructures are placed under the responsibility of the community of agglomeration of Cotentin.

Today, the airship hangar can be visited through a local association that promotes the safeguarding of the site. 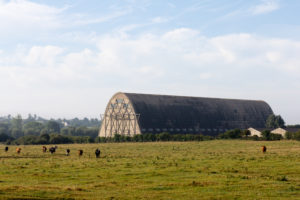 Back to the history of Ecausseville