The railway network crossing the commune of Ecouché is the target of violent aerial bombardments as from 6 June 1944, in the early afternoon: at 1.45 pm, the whole village is caught under the bombs of two successive air formations and its Southern half is completely destroyed (especially the station area). 356 inhabitants are killed during this raid. The survivors mobilize to care for the wounded and the bodies of the victims are placed in Notre-Dame church where they are watched overnight. Three grocery stores, two hotels and a garage are completely destroyed. The rail network is intact. New aerial bombardments took place in July, this time without causing civilian casualties.

On August 12, 1944, the 2nd French armored division commanded by General Leclerc began its advance towards the north in the direction of Ecouché to participate in the closure of the trap in which 110 000 Germans are trapped west of Falaise. On August 13, at 7:00 am, Colonel Warabiot commanding the 501st Battle Tank Regiment (RCC) began the infiltration of Ecouche without preparation of artillery, thus promoting the effect of surprise while avoiding further civilian casualties. Reconnaissance elements followed by the 1st squadron of the 501st RCC under the orders of Captain Buis entered the commune. The French discovered in the center of the city a column of German soldiers belonging to the 116. Panzer-Division being withdrawn to the north and they immediately engaged the fight. Despite heavy losses (several tens of vehicles destroyed), several Germans managed to escape, covered by the action of a formidable Panther tank. They maintain themselves on the heights north of Ecouché, from where they forbid any French progression. For their part, Colonel Warabiot’s men also valued their land while two tanks of tanks continually opened fire on the edges to the east of Ecouche. The 501st RCC was ordered to seize the bridge over the Orne to secure this structure against any attempt of destruction by the Germans and the French then manage to seize the ruins of the city.

On August 14, the Allied air forces bombarded the German positions north of Ecouche, giving a non-negligible support to the French forces which still undergo fratricidal fire from the aviation during these engagements: thus, the tank Sherman baptized “Bir Hakeim” is destroyed west of Ecouche, killing the crew and 4 civilians nearby. On August 15, the Sherman “Massouah” tank of the 1st squadron of the 501st RCC was destroyed to the east of the town by a German tank. The 116. Panzer-Division mounted several counter-attacks to resume Ecouche but without success. However, several soldiers of the 2nd Armored Division are killed during these engagements, notably on 16 August during a major German attack which is directly directed at the positions of the men of the “Nueve” (9th Company of the Marche Regiment of Chad ), Spanish and French volunteers serving in the 2nd Armored Division. The infantrymen of the SS Panzer-Division “Das Reich” attack again the next afternoon but without success.

On August 20, 1944, the trap closed on the Germans at the height of Chambois and most of the encircled soldiers surrendered to the Allies, thus putting an end to the fighting in the area of ​​Ecouché. 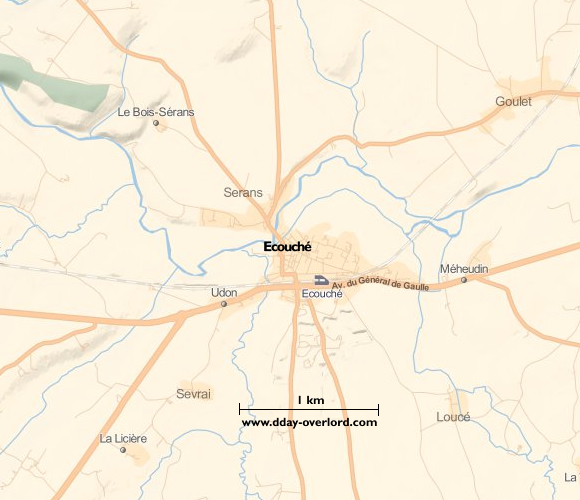