British and Canadian Airborne Forces are responsible for seizing the shore east of the Orne on the night of June 5-6, 1944, which is held by the 716. Infantry Division. This operation is known as Tonga. The 2nd Battalion Oxfordshire & Buckinghamshire Light Infantry (6th Airlanding Brigade) and the 12th Yorkshire Battalion Parachute Regiment (5th Para Brigade) are responsible for seizing the Bénouville sector and the bridges over the Orne and Caen Canal In the first minutes of the airborne assault allied in Normandy.

The outskirts of Hérouvillette were reached in the early afternoon of June 7 without particular combat and the paratroopers continued to Escoville. Around 3 p.m., a counter-attack led by the Kampfgruppe von Luck of the 21. Panzer-Division repulsed the English during their reconnaissance of the town. It was during this engagement that Lieutenant Hooper of Company D of 2nd Ox & Bucks was wounded by a German MG-42 machine gun. Although controlling a small part of the locality, the airborne soldiers withdrew to Hérouvillette and entrench themselves there, leaving Escoville in the hands of the adversary for long weeks.

Several German counter-attacks carried out by the 21. Panzer-Division aiming to break through the front fail, especially on 9 and 10 June.

In the second half of July, General Montgomery launched a new offensive to capture Caen from the eastern Orne: Operation Goodwood. On July 18, 1944, the British troops massed in the area and progressed due south after one of the most important artillery fire of the Battle of Normandy. It was during this offensive that the commune of Escoville was finally liberated. 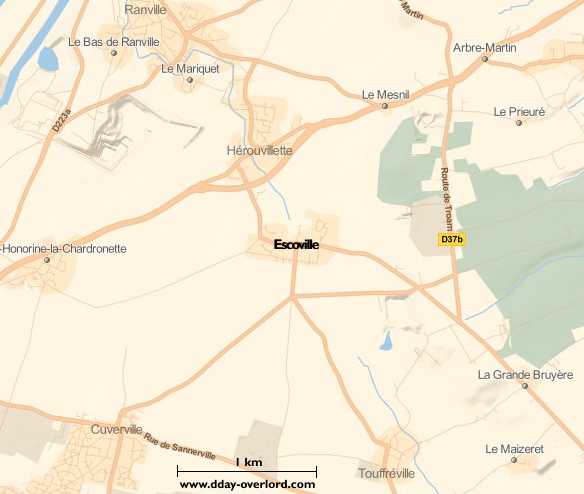