Eterville in 1944 – Calvados – Battle of Normandy

On July 8, 1944, a new offensive in the area of ​​Caen began, dubbed Operation Charnwood: it was preceded by one of the most violent aerial bombardments of the Battle of Normandy. The municipality of Eterville is one of the objectives of the 130th Infantry Brigade (43rd “Wessex” Infantry Division) to control several crossing points on the Odon southwest of Caen. But the Germans of the 10.S. Panzer-Division “Frundsberg” offer a fierce resistance and the British struggle to break through the front line. The 4th Battalion, Dorsetshire Regiment manages to reach Eterville but the Germans unleash a very violent artillery fire and the attacker finds himself in a very uncomfortable situation, likely to be jostled at any time by a possible counter-offensive.

The 4th Battalion, the Dorsetshire Regiment, was recorded on position by the 9th Cameronians (Scottish Rifles) belonging to the 46th (Highland) Infantry Brigade (15th Infantry Division) which holds the village and reinforces the defensive positions for the night . The next morning, the SS Panzer-Division counterattacked and managed to repel the Scots outside Eterville around 3 pm. The British artillery intervened immediately to prevent the Germans from settling there permanently and installed a real fire dam. The S.S. turn back, definitively abandoning the village. It was the 2nd Infantry Division’s Canadians who seized it with the commitment of the 8th Reconnaissance Regiment, 14th Canadian Hussars and the Royal 4th Canadian Infantry Brigade. 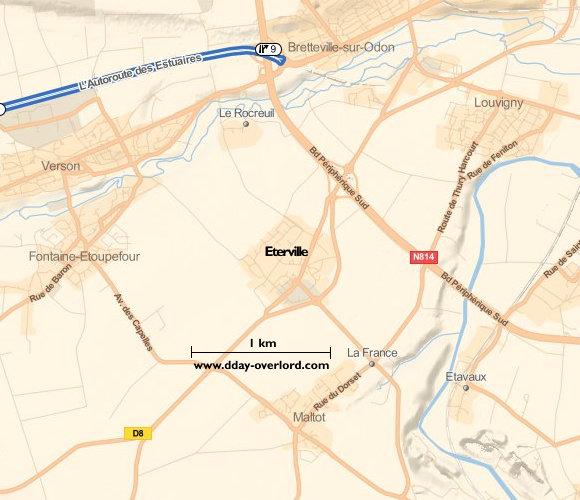