On June 15, 1944, from 3:00 to 3:20, the Allies bombed the village of Evrecy during an air raid which transformed the town into a heap of ruins. At that time, the 3rd squadron of the Schwere SS Panzer Abteilung 101 was in the area. When the first phosphorus bombs exploded, the German tanks were immediately ordered to leave the town: 18 crew members Unit and platoon leader) are killed and eleven others are wounded during the raid, several tanks are destroyed. At daybreak, when the civilian population begins to search for survivors, the lifeless bodies of 130 inhabitants (out of a total of 400) are found. Evrecy is destroyed at 86%.

On July 15, 1944, the British activated Operation Greenline to achieve various objectives: tactically, they wanted to seize new communes and in particular Evrecy which is close to a land movement listed 113; Strategically, it is a matter of fixing the German armored divisions in the area to prevent them from counter-attacking in the direction of the Americans. At 9:30 pm, they set off a violent bombardment that touched the ruins of Evrecy in order to prepare the offensive; The Royal Welch Fusiliers belonging to the 158th Infantry Brigade (53rd Infantry Division), backed by the 7th (Merionethshire and Montgomeryshire) Battalion The Royal Welch Fusiliers And by the tanks of the 34th Royal Tank Regiment, attack the hill 113 and the village in the early hours of July 16th. In the early days of the offensive, about fifty HS soldiers were taken prisoner, but the British lost their first tanks and the momentum of the attack was running out of steam. The Germans belonging to Infantry Division 276 and Infantry Division 277 are reinforced by at least fifteen heavy tanks belonging to the SS Panzer Division Hohenstaufen.

The darkness, the explosions and the artificial cloud caused by the smoke are at the origin of the extraordinary confusion that reigns during this battle. The units progress in one direction and then in the other, attack, retreat and attack again a few hours later. The fighting continues throughout the day. On the evening of July 16, the 53rd Infantry Division ranked 113 alongside the 6th Battalion The Royal Scots Fusiliers and the 6th Battalion of the 44th (Lowland) Infantry Brigade (15th Infantry Division), but Evrecy At the hands of the adversary. The Germans, resisting with all their strength in this village and in other sectors, forced the British to relaunch the offensive by triggering a new operation called Pomegranate on 16 July. The SS Panzer-Division Hohenstaufen is severely hit and loses 23 tanks during the day’s engagements.

On 17 July the battle continued and was still raging in the Evrecy area, particularly at Mondeville farm, and the Germans counterattacked with the SS Panzer-Division Hohenstaufen and the SS-Panzergrenadier Regiment 22 (10. SS Panzer-Division Frundsberg), preventing the British from controlling the sector. During the fighting for the liberation of Evrecy and the taking of the 113 mark of 16 to 17 July 1944, 120 soldiers of the 158th Infantry Brigade are killed.

Starting on 4 August, the Germans made a withdrawal, which enabled the British to resume the progression and to take Evrecy in the day. 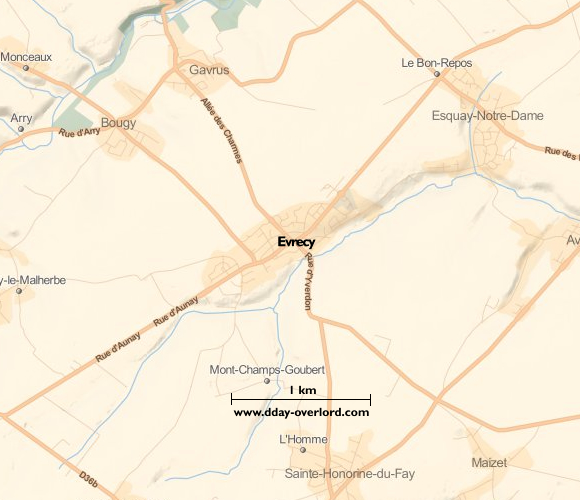