Falaise in 1944 – Calvados – Battle of Normandy

On June 7, 1944, the Allies bombed the town of Falaise for the first time in an air attack aimed at slowing the advance of German reinforcements towards the landing beaches.

On the night of 4 to 5 August 1944, No. 342 Squadron (Bomber Group No. 1/20 “Lorraine”) belonging to the 137 Wing (2 Group, 2nd Tactical Air Force) and made up of French Air Force (FAFL) is engaged in a bombing mission of the German units, which retreat to break the risk of encirclement. 3 aircraft were killed during the mission and one of them crashed to the northeast of the Falaise commune: the Douglas A-20 Havoc bomber, registered 42-33191, was hit at low altitude by the anti-aircraft defense German, loses its engines and must make an emergency landing. The crew consists of Sergeant Pierre Pierre (pilot), Hubert Cornement (observer), Warrant Officer François Dumont (radio), and Sergeant-Chef Louis Ricardou (machine gunner). Corning and Ricardou are killed during the crash, while Dumont and Pierre, wounded, manage to escape the German patrols (the first, aided by the resistance, returns to its base on August 19 while the latter finds it on August 24).

The Anglo-Canadians want to exploit the results of Operation Totalize, which enabled them to reach the heights north of Falaise as of August 11, 1944. General Crerar, commander of the newly formed Canadian 1st Army, Tactics to break through the German lines of defense and reach Falaise at the earliest. He draws heavily on the innovations made by General Simonds at Totalize, including the use of the Kangaroo APC, a modification of the American M7 Priest howitzer to carry up to fifteen infantrymen. Crerar also plans to launch the assault in the middle of the day, considering that the impact of an attack at dawn does not finally play either in his favor or in that of the Germans. This new offensive land is named Tractable operation.

The plan of the attack provides that after a massive bombardment of German defense positions, the Canadians begin their progression towards Falaise since the 195 with two front units: the 4th Armored Division to the west and the 3rd Infantry Division to the east (supported by the 2nd Armored Brigade). After Canadian-controlled Falaise, the assault troops (reinforced by the 1st Polish Armored Division) must proceed towards the town of Trun to the east. In front of the Canadians, the German positions are held by the 12. Panzerdivision Hitlerjugend, commanded by Kurt “Panzer” Meyer. Installed in firm defense since the completion of Operation Totalize, they have increased the number of combat patrols to the number 195.

Armored noises and troop movements in the direction of the front line are noticed by German advanced observers who suspect their opponents of relaunching the offensive very soon. The Allies renew major air raids on 12 and 13 August. These assumptions were confirmed on the night of August 13-14, 1944 when a Canadian officer, who lost himself on his way to the command post, crossed the German lines and was killed: he had a copy of General Simonds for the next day’s attack. As a result, Kurt Meyer moved his reserve into Falaise protection, namely 15 tanks, 12 guns of 88 mm, 43 guns Pak 43 and 500 infantrymen.

On August 14, 1944, at dawn, the Germans stood ready to contain the Canadian assault. But there was no sign of progression by the outposts, and there was no aerial bombardment: was the message found on the Canadian officer’s body a forgery intended to deceive the Hitlerjugend. The 12th SS Panzer Division did not wait long to get an answer: at noon 800 Halifax and Lancaster bombers dropped 3,700 tons of bombs on German positions, but this time again on some allied positions: 400 Canadian and Polish soldiers Are put out of action in the first few seconds of Operation Tractable following bombardment errors. However, the troops under General Crerar set off and stormed the opposing positions. The German resistance is strong despite the bombing and the Allies lose time by crossing the lines of defense installed in the outskirts of Falaise. But they manage to cross the Laizon River. The progression stops at nightfall, Falaise is still in the hands of the Germans who hold despite adverse pressure.

On August 15, 1944, the offensive resumed, and the following day, August 16, the Canadians attacked Falaise from the west and the town fell into the hands of the 6th Infantry Brigade of the 2nd Canadian Infantry Division, although several German pockets of resistance Still in the midst of the ruins. About fifty young fanatics, commanded by the SS-Sturmbannführer Krause and the 12th SS Panzer-Division Hitlerjugend, took refuge in the girls’ school which is besieged by the men of the Fusiliers Mont Royal regiment. Canadian infantrymen are supported by tanks from the 27th Armored Regiment “The Sherbrooke Fusilier” (2nd Armored Brigade). The Germans resisted all day of August 17 before being definitively neutralized by the Canadians: only 3 SS were taken prisoner in the school of girls.

The city of Falaise is destroyed to almost 80% by the successive bombardments. The Allies then begin the last phase of the closure of the trap in which nearly 110,000 German soldiers are surrounded. A narrow 9-kilometer corridor, located south-east of Falaise at the height of Chambois, still allows them to exfiltrate and the Allies are trying to close it as fast as possible. 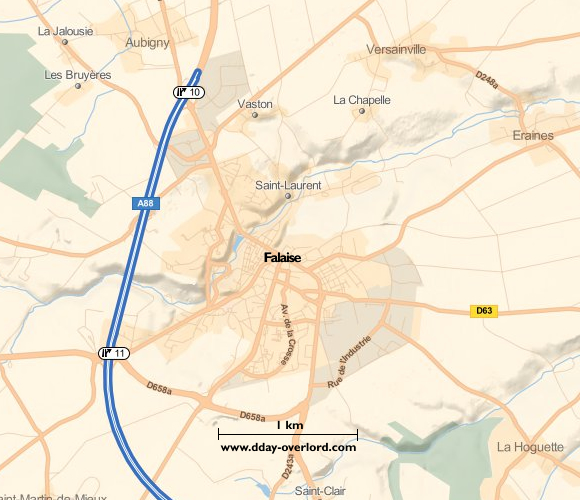