Fauville was occupied in the spring of 1944 by German soldiers of the 3rd Battalion of Grenadier-Regiment 1058 (91. Infanterie Division). This village is located on a terrain that allows to have views of the surroundings. Fauville is located about 1,500 meters south of Sainte-Mère-Eglise which is the priority objective of the 3rd Battalion of the 505th Parachute Infantry Regiment (82nd Airborne Division) commanded by Lieutenant-Colonel Edward C. Krause. In addition, this municipality is on the northern edge of a landing zone coded “LZ W”.

On 6 June 1944, the Allies began the assault in Normandy. When Sainte-Mère-Eglise was under American control, Lieutenant-Colonel Krause ordered the company G (commanded by Captain Robert Follmer) in the morning to recognize National Road 13 in the direction of Fauville in order to secure the southern approaches to Sainte -Mother-Eglise. The Germans hold the village and fighting hard. At 10 o’clock, two infantry companies of the 3rd Battalion of Grenadier-Regiment 1058 counter-attacked to the north, supported by self-propelled guns. The paratrooper Dominick DiTullio of the company G, isolated, opens fire on his opponents and manages to put off several frames: without leaders, the Germans stop and then withdraw to reorganize. The self-propelled guns are destroyed by a 57 mm gun positioned at the southern exit of Sainte-Mère-Eglise and armed by the 80th Airborne Anti-Aircraft Battalion. The Germans set up an artillery fire on Company G’s position, causing heavy casualties: a shell fell in the middle of a fighting group, cutting one leg to the soldier William C. Walter, the two legs of the soldier Robert E. Holtzmann and killing Sergeant Stanley S. Smith and Private Robert L. Herrin. Despite the intervention of the health auxiliary, Private Marty Cuccio, and Captain Robert Franco, physician Walter and Holtzmann died a few minutes later, their suffering being mitigated by the injection of morphine doses.

The intervention of company I commanded by Captain Harold H. Swingler made it possible to postpone the German counter-attack. At 1830 hours, US parachutists managed to seize some houses north of the commune but their opponents still hold the southern part.

By mid-afternoon on D-Day, US soldiers from the Third Battalion of the 8th Infantry Regiment (4th Infantry Division) commanded by Lieutenant-Colonel Erasmus H. Strickland reached National Highway 13 at Forges Heights and then proceeded to The resistance pocket of Fauville. They are accompanied by elements of the 82nd Airborne having landed on Utah in the morning and commanded by Colonel Edson D. Raff. Although encircled to the north by the parachutists and to the south by the infantry supported by tanks, the Germans stand firm and forbid any advance on the national road which they sweep under the fire of their guns. Time is of the essence: the Americans must absolutely neutralize this threat which threatens the arrival of glider reinforcements on the LZ W which is still within range of their opponents. On 6 June at 9 pm, a glider landing takes place at this location in accordance with the Elmira plan. On June 7, two other airborne operations (baptized Galveston and Hackensack) are also scheduled from 6 am.

On June 7th, as these reinforcement operations began, the Americans failed to dislodge their opponents from Fauville and the gliders recorded losses on the LZ W which is still unsafe. At the end of the morning, the 3rd Battalion of the 8th Infantry Regiment began to assault the village and the land movement on side 20. The Germans fired back with heavy machine-gun fire and an artillery barrage, the fighting was particularly violent . On the right flank of the 3rd battalion, the 2nd battalion seized Ecoquenéauville and the German front gradually broke: the men of Lieutenant-Colonel Erasmus H. Strickland finally managed to seize Fauville, clearing National Road 13 and putting an end to the resistance in the area. 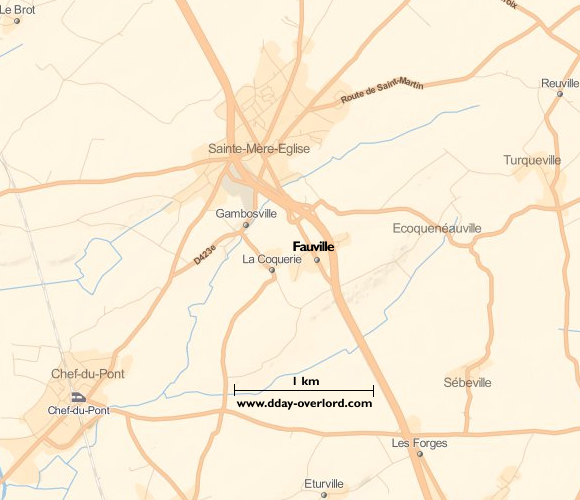