Formigny in 1944 – Calvados – Battle of Normandy

On 1 June 1944, the village of Formigny housed the command post of the 2nd Battalion of the Grenadier-Regiment 916 (352. Infanterie-Division) under the orders of the Hauptmann Grimme. The village also houses artillerymen of the 2nd battery of the Artillery-Regiment 352 whose 4 pieces theFH 18/40 of 105 mm are positioned north-west of Formigny, at Montigny.

On D-Day, June 6, 1944, the Americans suffered extraordinarily high losses during the landing on Omaha Beach and the objectives of the day were far from being reached. Nevertheless, the forces disembarked organize themselves to regain the ascendancy over the adversary. At 9 pm, the 3rd Battalion of the 26th Infantry Regiment (1st Infantry Division) commanded by Lieutenant-Colonel John T. Corley was ordered to seize Formigny. Progression takes place at night and is particularly slow. The battalion was detached from the 18th Infantry Regiment as part of the Formigny attack.

The battalion’s progression along County Road 517 continued on June 7 with the support of Sherman tanks of the 741st Tank Battalion and the 745th Tank Battalion. The men of Corley are set less than one kilometer north of Formigny by crossfire of heavy machine-guns adverse, they can not go further and settle in prohibition facing south for the night. Shortly after midnight, Company B of the 18th Infantry Regiment attacked the village from the south, supported by tanks from Bquadron B of the 745th Tank Battalion. The Germans killed 10 and 15 others were taken prisoners. This action forces the other defenders to abandon their positions. Only the nests of machine guns that fix the 3rd battalion remain in place until the end of the morning of 9 June. After the withdrawal of their opponent, the Americans entered the village and settled there.

Soon after Lieutenant-Colonel Corley’s men invaded Formigny, the 3rd Battalion of the 115th Infantry Regiment (29th Infantry Division), commanded by Major Victor P. Gillespie, arrived on the spot and started the relieving position of the 3rd Battalion of the 26th IR. The relay ended at 1:40 pm and Lieutenant-Colonel Corley was able to resume the advance with his battalion heading for Ste. Anne in the southeast.

A few days after the liberation of Formigny, a camp of German prisoners is installed in the area of ​​the commune. 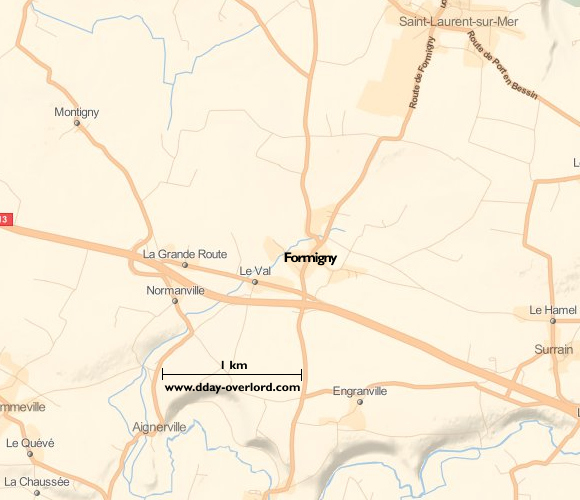