Graignes-Mesnil-Angot in 1944 – Manche – Battle of Normandy 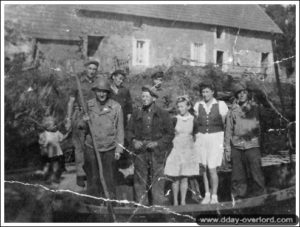 American soldiers alongside the inhabitants of Graignes in June 1944. Photo: DR

On June 6, 1944 at 2 hours 38, the last apparatuses to drop paratroopers appear above the Cotentin. Very few of these Douglas C-47s are equipped with the GEE locator system or the Eureka-Rebecca system. The crews, disoriented by anti-aircraft guns, dispersed by winds of more than 40 kilometers per hour, obliged to respect radio silence and return to England without their parachutists, find themselves in critical situations and the proximity of the Channel Which leads to the fear of dropping the men into the sea causes very bad decisions. Paratroopers of the 3rd Battalion of the 507th Parachute Infantry Regiment (82nd Airborne Division) under the orders of Lieutenant-Colonel Arthur A. Maloney and some elements of the 501st Parachute Infantry Regiment (101st Airborne Division) were dropped by mistake at Graignes instead of Landing on their initially planned jump zone, more than 23 kilometers to the north. At 3:54 pm, a Waco glider belonging to the 74th Transport Carrier Squadron (53rd Transport Carrier Wing of the 9th Troop Carrier Command) is also dropped by mistake above Graignes: its pilots, Flight Officer Irwin J. Morales and 2nd Lieutenant Thomas O. Ahmad, managed to escape from the wreck of the aircraft after landing with two soldiers, Norwood Lester and George A. Brown.

Totally lost and isolated from the rest of their regiment, these men wait for daybreak to locate themselves and decide to stay in the locality and barricade themselves while waiting for the reinforcements. At 10 o’clock in the morning, 25 paratroopers led by Captain Leroy D. Brummitt moved into the village of Graignes, where they were soon reinforced by other soldiers of the 3rd Battalion led by Major Charles D. Johnston: the Americans had Two 81mm mortars and four Browning 30 caliber machine guns. They value their positions, dig combat holes and prepare firing positions as they learned during training. The bell tower of the church is used for all-round observation, the mortar group settles near the cemetery and bells are placed along the approach roads of the village. The parachutists also have anti-tank mines that they put up on the axes.

Sergeant Benton J. Broussard, an Acadian from Louisiana who speaks Cajun, immediately contacts the local population, and in particular with the mayor, Alphonse Voydie, who is helping his reserve. Major Johnston, who is the most senior officer in the village, sets up his command post in the boys’ school and redirects all the lost paratroopers who continue to flow: around 5:30 pm, elements of the (Including 1st Lieutenant Elmer F. Farnham, 1st Lieutenant Lowell C. Maxwell and 1st Lieutenant Frank Naughton) reinforce the position of the village of Graignes. They are accompanied by a group of paratroopers belonging to Company B of the 501st Parachute Infantry Regiment (101st Airborne Division) also dropped to the wrong place and led by Captain Loyal K. Bogart who is injured. All night and all the following day, other isolated paratroopers arrive at Graignes and the Americans are 182 in total (including 12 officers). This situation reminds paratroopers of the history of Fort Alamo, a barracks defended by 189 Texans against 1,800 Mexican soldiers and riders during the Texas revolution in 1836.

During the day of June 7, 1944, a problem quickly appeared: not being supplied, the Americans had to get supplies of food and ammunition as soon as possible. Aware of the situation and the need to feed 182 more mouths, Mayor Alphonse Voydie gathers the inhabitants in the church and asks them to give all the help needed to the American soldiers, especially in the field of Intelligence and refueling. In an extraordinary momentum, the villagers do their utmost to help these soldiers whose desperate situation they understand. The inhabitants make this decision unanimously and knowingly: they know that they risk imprisonment, torture or death by giving their unconditional help to paratroopers. The village grocer, Germaine Boursier, takes advantage of his provisions and his house (also known as the “red house” which also makes coffee) to prepare paratroopers rations. With the help of several other women in the village, Germain Boursier does his best to prepare two meals a day for each soldier. Ammunition and additional weapons, parachuted by mistake in the area, are recovered in the fields and orchards of the surrounding by the inhabitants and are quickly hidden in the houses for the benefit of the Americans.

During the following days, the Americans made a low profile in order not to arouse the suspicions of the Germans. It is only the inhabitants of Graignes who recover the ammunition and the equipment while the paratroopers remain camouflaged in the village. Major Johnston began to believe that the reinforcements would succeed in joining them without them having to defend their positions. But gradually, the villagers realize that German activity in the region is increasing day by day and the time for confrontation seems inevitable.

On the afternoon of June 10, a German patrol took over the village and reached the position held by 1st Lieutenant George Murn of company B of the 501st Parachute Infantry Regiment (PIR). Waiting for the last moment to start the fight, Lieutenant Murn opened fire and his men killed four German soldiers. On the night of 10 to 11 June, there was an increasing number of vehicular traffic noises in the area and several small-scale fights against adverse patrols. A document is found in the uniform of a German officer killed overnight, indicating the type of unit the Americans face: the SS Panzergrenadier Regiment 38 belonging to the 17. SS Panzer-Division “Götz von Berlichingen”. Insufficiently armed to fight this kind of adversary, paratroopers fear to undergo an assault of tanks and put on alert their whole device during the following hours.

At sunrise, on Sunday, June 11, the Americans do not detect any enemy activity in their area. As a result, Major Johnston authorized his men to attend the Mass of Father Albert Leblastier which began at 10 am. But at the same time, the Germans launched an assault south of the village and some of them penetrated less than two hundred meters from the church, causing panic in the American device and the inhabitants shelter at home or in the church. The paratroopers gain their positions and engage in a furious fight. At 10.20 am, the assault was over and the Germans recovered their wounded and their dead, many of them before retreating to the south. Now Johnston is forcing his men to stay at their fighting post, expecting further attacks. Around 2 pm, the Germans triggered a mortar fire on Graignes in preparation for a new assault: the American defensive system holds good but the first severe losses are recorded, both in the ranks of the parachutists and among the civilian population. The wounded are transported to the church where they are cared for by Captain Sophian, Father Leblanc, Father Louis Lebarbanchon and several other people (in particular Eugenie Dujardin and Madeleine Pezeril). Following this second attack, Major Johnston decides to replicate all battle stations outside Graignes inside the village. Ammunition recompletions are carried out but the remaining quantities are worrying.

New sounds of armored vehicles are detected and Johnston, expecting a general assault of their opponents, asks the inhabitants to flee the village around 19 hours. At the same time, 88 mm guns opened fire on US positions and dwellings, affecting several buildings. The bell tower of the church where Lieutenant Farnham is located is hit and killed instantly. With the destruction of this observation post, the Americans are unable to correct the mortar fire. Nevertheless, the servants realize shooting eventhough they do not see any targets. An 88 mm shell then reaches the command post, killing Major Johnston and Lieutenant Maxwell. Captain Brummitt then took command. In the aftermath of the artillery fire, the German infantrymen assault: soon the line of defense collapses. The Americans no longer manage to defend a homogeneous front and they entrenched themselves in different posts that are isolated from each other. Progressively, the paratroopers are overwhelmed by the adversary; They break contact and retreat into disorder in favor of the night, leaving several wounded behind them. On the German side, the losses recorded from 10 to 11 June 1944 are impressive: they are estimated to be about 500 killed and 700 wounded, which is difficult to verify.

Once the village of Graignes is under their control, the SS take the wounded and Captain Sophian out of the church and divide them into two groups; The first, composed of 9 parachutists, headed south, while the second, with 5 paratroopers, was escorted to a pond. The latter, when they reach the level of the pond, are executed with the bayonet and thrown into the water. The first group walks to the hamlet of Mesnil-Angot, four kilometers to the south, where the 9 wounded paratroopers have to dig a trench. Once they have finished, they are shot in the head and their bodies are Thrown into the pit. The Germans are also targeting villagers suspected of helping those they consider to be “American terrorists.” The two churchmen, the Abbe Leblastier and Father Lebarbanchon are coldly executed in front of their house. Madeleine Pezeril and Eugenie Dujardin (aged 80), refugees at home, are killed in their beds. Several villagers (44 in total) are gathered and the Germans order them to denounce those who helped the paratroopers: no inhabitant utters a word. In retaliation, several of them are then driven south to transport the bodies of the German soldiers killed during the fighting, an operation that lasts all night.

On June 12, 1944, at daybreak, the houses were searched and pillaged by the Germans: valuables were stolen and objects that were not transportable were destroyed. Meanwhile, the paratroopers who fled the village wander through the swamps. Not far away, Odette Rigault leaves her parents’ farm and discovers Lieutenant Frank Naughton on the way. She drove him to a barn where his family stored parachuted ammunition on D-Day. Several paratroopers converge towards this barn during the day; They are 21 in total. The Rigault family unhesitatingly agrees to help them: they hide them and feed them, hoping for a breakthrough as soon as possible from American troops in the area. Lieutenant Naughton left the farm that same day and headed for Carentan. On the way, he meets Captain Brummitt at the head of a group of parachutists. Several American soldiers do the same, isolated or with several.

On 13 June, the SS set fire to the village and the bodies of Abbot Leblastier, Father Lebarbanchon, Madeleine Pezeril and Eugenie Dujardin in the church. Of the 200 buildings Graignes had at that time, only two houses were spared. The 21 parachutists hidden in the barn of the Rigault farm left the premises on June 15 at 10 am accompanied by the young Joseph Folliott, aged 15, who transported them aboard a boat on canals in the direction of Caen. They reached their destination safe and sound: the paratroopers handed him notes of the invading currency, but he accepted nothing. Of the 32 US soldiers killed at Graignes, 17 were executed by the SS.

Graignes was definitively released only on July 10, 1944 by the Americans of the 113th Cavalry Group: the Germans abandoned the village.

In 1984, forty years after these terrible battle days, Naughton and Pip Reed, both lieutenants at the time of the disembarkation, are back in Graignes and they meet Marthe and Odette Rigault: it is only at that moment That the two sisters learn the fate of the soldiers they helped and sheltered temporarily in the barn of the family farm. From 1984 to 1986, Naughton and Reed made requests for several residents to be rewarded with an official decoration and on July 6, 1986, in the ruins of Graignes’ church, eleven villagers (six posthumously) were decorated with The Distinguished Civilian Service for their assistance to American paratroopers. 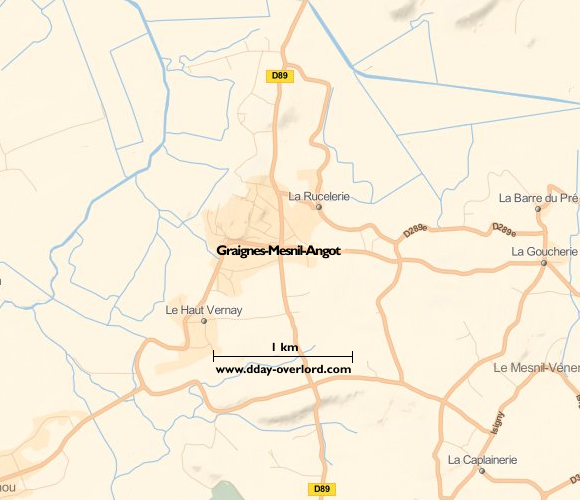