On June 7, 1944, in the aftermath of D-Day, the SS Panzergrenadierregiment led by SS Standartenführer Kurt Meyer and belonging to the 12th SS Panzer-Division Hitlerjugend counterattack towards the beaches and pushes the Canadians beyond Gruchy.

SS Soldiers, determined not to retreat and to die on the spot if necessary, hold this position for a full month, pushing back several Canadian patrols. General Montgomery set up several operations to capture the city of Caen: Operation Perch (June 7, 1944), Operation Epsom (June 26, 1944) and Operation Windsor (July 4, 1944). Operation Charnwood, launched at the dawn of July 8, 1944, was to change the situation: a few hours earlier, one of the most important aerial bombardments of the Battle of Normandy took place: 467 bombers of the Royal Air Force, 656 artillery guns from five different divisions as well as four warships are dedicated to supporting the ground troops, not to mention reinforcements from the US Air Force and allied light fighter-bombers.

In spite of this devastating firepower, the St. Lawrence and the soldiers of The Stormont, Dundas & Glengarry Highlanders stormed to take Gruchy, the Canadians did not manage to take a permanent foothold in the town.

The furious battle resumed with an unchanged intensity at the dawn of July 9, 1944, the S.S. not retreating under any pretext and not hesitating to fight in hand to hand. In the middle of the morning, the Germans bent under the courageous efforts of the Canadians who finally seized the Gruchy, in spite of very heavy losses.

July 9, 1944: Soldiers from the Stormont, Dundas and Glengarry Highlanders in the Gruchy area. Photo: IWM. 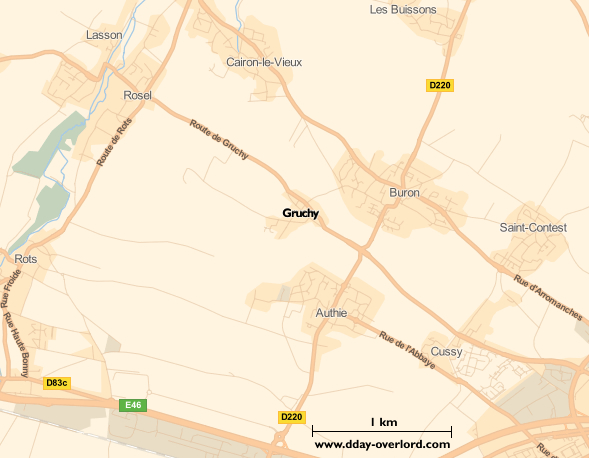