In the spring of 1944, the hamlet of the Germain hamlet is home to some dwellings and a farm. It is occupied by two platoons of the 13th company of the Grenadier-Regiment 919, equipped with four 7.62 cm leKH 290 Russian guns.

On June 6, 1944, at the end of the morning, the Germans installed in these houses began to retreat and gather all their equipment and the elements of their battery on trailers traced by horses. They heard shots and explosions at the Brécourt battery, located only 300 meters to the northwest.

When they leave the farm to join the departmental road 913 which allows to reach Sainte-Marie-du-Mont, they are detected by the infantrymen of company I commanded by Captain Frederick C. Maisel, Jr (3rd battalion of 8th Infantry Regiment, 4th Infantry Division) that landed on Utah Beach and progressed to the southwest. Maisel plans to mount an ambush and orders his section chiefs to deploy in the field to the north of the farmhouse: camouflaged by the presence of an imposing hedge, they progress in discretion and protected from the sights. On order, they open fire on the first elements who have no chance: surprised, the Germans try to flee but the horses are unable to accelerate due to the weight of the trailers. 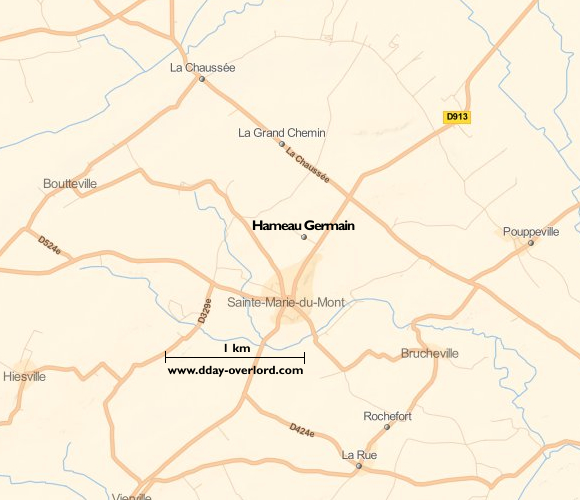