On June 12, 1944, the village of Hébécrevon suffered an air attack aimed at a German vehicle driving at high speed: on board is General Erich Marcks, commander of the LXXXVII. Armeekorps who inspects the front. He is seriously touched in the groin by a 20 mm shell that breaks the femoral artery: transported by his driver into a ditch, he dies at 9:45 am.

At the beginning of July 1944, the Germans repeatedly installed artillery batteries in the Hébécrevon sector, which were systematically targeted by Allied aviation, and on 8 July the inhabitants were ordered by the Germans to evacuate the village.

The Americans are planning an operation to break through the front line south of Cotentin – Operation Cobra – and plan to launch a massive air raid in the Hébécrevon sector on July 24: 1,600 bombers of the 8th US Air Force are engaged and The launch of the offensive begins the next day. US soldiers killed A new aerial bombardment with 3,300 tons of dropped bombs is carried out in the area from 9:40 on July 25: Hebécrevon is reduced to ashes. Beginning the progression, American observers detect Germans in the church steeple and immediately trigger a destruction shot that causes the entire building to collapse. The 30th Infantry Division commanded by Major General Leland S. Hobbs is in charge of seizing the ruins of Hébécrevon, but the unit has once again suffered heavy losses following the American bombardment around 11 am: nearly 120 soldiers from The division are killed by mistake while 500 others are injured.

Despite the losses suffered and the dramatic fall in the morale of the troops, the 30th Infantry Division finally attacked at 11.30 in the direction of Hebecrevon. The 2nd Battalion of the 119th Infantry Regiment reached the ruins of the village but was stopped by an unexpected German resistance given the amount of bombs fallen in the area. It falls in support while the 1st battalion bypasses the opposing defenses by the east and the 2nd battalion by the west. But the Germans hold fast and the Americans decide to stop their progression at nightfall. Shortly after midnight, in the early hours of July 26, the 119th Infantry Regiment finally seized the ruins of Hébécrevon. 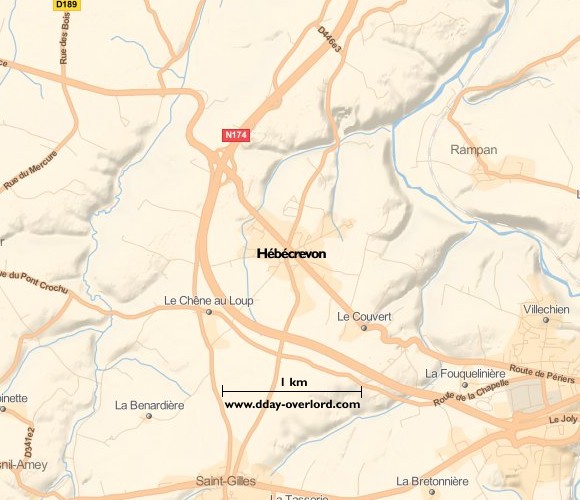