British and Canadian Airborne Forces are responsible for seizing the shore east of the Orne on the night of June 5-6, 1944, which is held by the 716. Infantry Division. This operation is known as Tonga. The 2nd Battalion Oxfordshire & Buckinghamshire Light Infantry (6th Airlanding Brigade) and the 12th Yorkshire Battalion Parachute Regiment (5th Para Brigade) are responsible for seizing the Bénouville sector and the bridges over the Orne and Caen Canal In the first minutes of the airborne assault allied in Normandy.

One hour after the success of this mission (coded Operation Deadstick) and the relief carried out by the troops disembarked, the 2nd Ox & Bucks is ordered to secure the shore to the southeast of the bridges, in particular the municipalities of Hérouvillette and D’Escoville, in order to enlarge the area controlled by the Allies. In the early hours of June 6, several British and Canadian paratroopers mistakenly landed in the Hérouvillette sector: some, wounded, were shot by the Germans of the 1st Company of the Pionier-Bataillon 716 when they had made themselves prisoners.

The outskirts of Hérouvillette were reached in the early hours of June 7 without particular combat and the paratroopers and air-transported soldiers seized the town.

Later in the afternoon, a counter-attack led by the 21. Panzer-Division pushed back the English 2nd Ox & Bucks then in reconnaissance in Escoville and they retreat to Hérouvillette. The English intrenched themselves and set themselves up in interdiction, constantly undergoing artillery fire on their position.

Several German counter-attacks by the 21. Panzer-Division failed, especially on 9 and 10 June (when Captain James Marriott, deputy officer of A Company of the 2nd Ox & Bucks, died). On June 13th, the 51st (Highland) Infantry Division placed the 6th Airborne Division in position at Hérouvillette.

In the second half of July, General Montgomery launched a new offensive to capture Caen from the eastern Orne: Operation Goodwood. On July 18, 1944, British troops massed in the area, crossed Hérouvillette and progressed full south after one of the most important artillery fire of the Battle of Normandy.

Today, 27 British soldiers are buried in the communal cemetery. They all belong to the 6th Airborne Division. 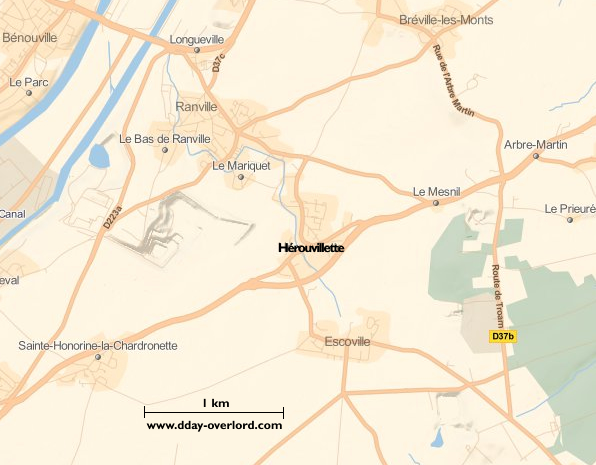