The village of Hiesville, occupied in the spring of 1944 by the German soldiers of Grenadier-Regiment 1058 (91. Infanterie Division), is in the immediate vicinity of the “C” drop zone of the 101st Airborne Division during Operation Albany in the early hours of D-Day. It is also located on the outskirts of the “E” landing zone intended for the completion of Operation Chicago. This landing zone (LZ) is triangular in shape, one kilometer long and one and a half kilometers wide. It is located at the heart of the 101st Airborne Division, which allows the three divisional jump zones to be reinforced in a minimum of time. Unlike the glider landing areas of the 6th Airborne Division northeast of Caen, LZ “E” is very compartmentalized in several orchards and fields bordered by high hedges peculiar to the Norman hedgerow and by lines of trees reaching Sometimes fifteen meters in height. However, the fields in this sector are on average twice as extensive as in the rest of Cotentin.

In the early hours of 6 June 1944 Operation Albany began. The drops for the drop zone (DZ) “C” face a large anti-aircraft artillery barrage during their passage over the Cotentin. These shots, which are not very precise but very numerous, disorient the pilots and cause a feeling of panic within the formations held by these 81 C-47s. Three of them are shot down before the launch. The first battalion of the 506th Parachute Infantry Regiment (PIR) is parachuted under correct conditions: two-thirds of the battalion is dropped directly on the DZ or less than a kilometer away. The paratroopers quickly seized the commune.

Then comes the turn of Operation Chicago. The marking on the ground by the Pathfinders on the LZ “E” is marked by the pilots of the 49 still operating C-47s who drop their trailer at 3 hours 54 for the first aircraft and 140 meters (450 feet) ‘altitude. Delivered to themselves, the gliders must rotate 270 degrees according to the preliminary instructions. During this delicate phase, many pilots are disoriented all the more because the luminosity of the Moon is very low during that night, the clouds being very numerous.

Only 6 of the 49 gliders land directly on LZ “E”, 15 others touch the Normandy ground less than one kilometer. 10 others land in the Forges region in the west (on LZ “W” for gliders of the 82nd Airborne Division). The remaining 18 gliders land within a radius of three kilometers around LZ “E”, except one that landed beyond it again. The landing of the gliders takes place under difficult conditions. Darkness poses serious problems for pilots who see the lines of trees along the fields belatedly and are obliged to change their zone of posting. The dew is particularly present at this time of night and the gliders glide on the grass without slowing down: most of them are embedded in the hedges at full speed despite all the efforts made by the crews to brake. This is in particular what happens to the pilots of the Fighting Falcon carrying General Pratt, second in command of 101st Airborne: in spite of the actions of Lieutenant-Colonel Murphy, the Waco hits a hedge of poplars 12 meters high To the southwest of Hiesville, 250 meters from the departmental 329. Inside, General Pratt sits aboard a Jeep and dies on impact, his neck broken by shock, while the second lieutenant Butler is killed by a tree branch crossing the co-pilot side cockpit.

Colonel Robert Sink, 506th PIR Corps Commander, sets up his command post in the town of Hiesville near Sainte-Marie-du-Mont. It is also in this village, in the manor of Colombières, that General Taylor has installed his. The manor of Colombières hosts the first divisional hospital of the 101st Airborne. 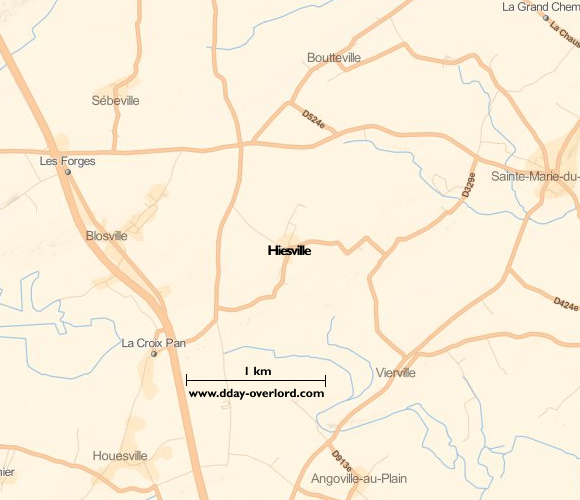