The town of La Brèche d’Hermanville in Calvados was occupied in 1944 by the 10th company under the command of the Hauptmann (captain) Heinrich Kuhtz, belonging to Grenadier-Regiment 736 (716. Infanterie-Division). The range is directly defended by an important German strongpoint coded Wn 20, also known as Stp 20 or Stp La Breche (Stützpunkt), which includes six anti-tank guns (one 88 mm gun) and a 81 mm mortar.

For the Allies, La Brèche beach is located on the “Queen White” coded area of ​​Sword Beach. The Wn 20 is nicknamed “Cod” by the Allies. It is the 1st Battalion South Lancashire Regiment (8th Infantry Brigade) that is in charge of seizing the position.

15 of the 19 amphibious tanks of the 13th/18th Royal Hussars (27th Armored Brigade) squadron manage to land on Queen White at 7:30 am. They are reinforced by Sherman Firefly tank of Sergeant Ellis and tanks A.V.R.E. Which are responsible for destroying concrete constructions. At the same time, companies A and C of the 1st Battalion South Lancashire Regiment (known as 1st South Lancs) landed from LCA and crossed the beach as best they could under a rain of bullets and shells. 25 minutes later, it was the turn of B and D companies to land, still under the fires of the Wn 20 strongpoint: Major Harrison, Commanding Company B, was killed and Major Egglinton, leading Company D, was wounded. The 1st South Lancs commander, Lieutenant-Colonel R. P. H. Burbury, is shot dead by a German sniper.

Despite these severe losses, the English seize the houses on the waterfront and storm the fortified point “Cod” with the support of the tanks. The 1st South Lancs is reinforced by elements of the 2nd Battalion East Yorkshire Regiment which landed on the Queen Red beach area. At 10 o’clock, the Wn 20 finally falls into the hands of the English.

The 1st Battalion South Lancashire Regiment continues in the direction of Hermanville-sur-Mer. 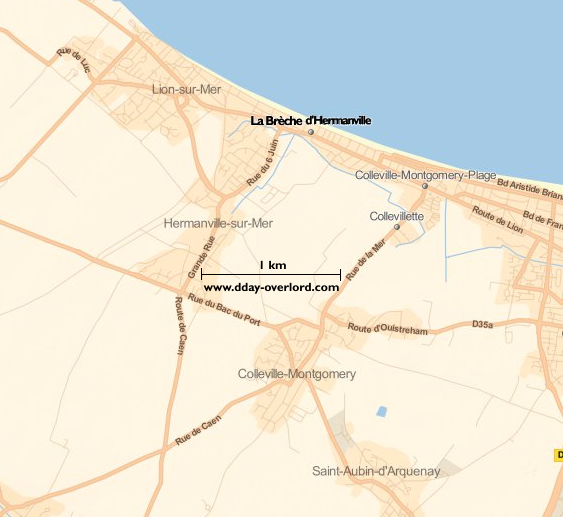