The hamlet of La Fière, placed in the spring of 1944 under the responsibility of Grenadier-Regiment 1058 (91. Infanterie Division), is located in the immediate vicinity of a crossing point on the Merderet River and across the flooded land of the area. This road, which is 500 meters long, becomes a priority objective for the Allies during the preparation phase of Operation Overlord: its control depends on maintaining the bridgehead in the Cotentin which is surrounded by the Douve in the south and the Merderet to the west.

The capture of La Fière and its precious bridge was entrusted to the 1st Battalion of the 505th Parachute Infantry Regiment (82nd Airborne Division) commanded by Major Frederick C. A. Kellam. Although the 505th PIR parachutes were the most accurate of all the allied drops on the night of June 5-6, Kellam failed to muster enough soldiers to divide his forces into two groups as agreed Towards the bridge of La Fière, the other towards that of Chef-du-Pont). He made the decision to concentrate his forces in the direction of La Fière. Company A, commanded by Lieutenant John J. Dolan, leads the system. Along the way they meet parachutists from various regiments of the 82nd Airborne Division who are attached to the current action while waiting to send them back to their unit. General Gavin, second in command of the division, advanced in the marshes bordering the Merderet river before joining in turn the forces of the 1st battalion of the 505th PIR en route to La Fière.

Lieutenant Dolan and Lieutenant John H. Wisner (information officer of the 507th PIR) stormed the bridge shortly after daybreak but were repulsed by enemy fire. Later in the morning, nearly 550 paratroopers of all units are gathered in the area of ​​La Fière. They are placed under the command of Colonel Roy E. Lindquist, corps commander of the 508th PIR. It organizes an assault on the hamlet of La Fière, relying on the most numerous organic groups: company A of the 505th PIR, company G of the 507th PIR and company B of the 508th PIR. At noon he ordered the assault of the hamlet where the German soldiers were cut off; After heavy fighting, the Americans seized the position and the paratroopers of company 507th PIR commanded by Captain Schwartzwalder succeeded in crossing the bridge of La Fière and then the road in the direction of Amfreville. They even managed to establish liaison with other paratroopers of the second battalion of the 507th PIR east of Amfreville before retreating to the height of Cauquigny.

A few hours later, the 1st Battalion of the 505th PIR took a position near the Pont de la Fière and replaces the men of Colonel Lindquist who are set back east along the railway. Progressively, in the middle of the afternoon, shots aimed at American positions were increasingly fed and the paratroopers of the 505th PIR were continually under fire, including artillery. Suddenly, at 4 pm, two Beutepanzer tanks of the Renault R35 type, belonging to the Panzer-Ersatz-Abteilung 100, appeared on the road and advanced towards the bridge at La Fière. Two teams of tank fighters armed with bazookas were installed in Fighting on both sides of the road and, on order, destroy the first tank. The opposing infantry (belonging to Grenadier-Regiment 1057) advances immediately behind the tanks and engages in combat at a very short distance. Supported by their comrades, the two teams of tank fighters open fire on the second armored vehicle which is destroyed in its turn. But one of the bazookas is out of use and the team folds. While the Americans no longer have anti-tank rockets, a third tank appears on the road, witnessing the scene from the east bank of the Merderet, Major Frederick Kellam and his deputy, Captain Dale Roysden, recover anti-tank munitions and cross the bridge to supply the line of contact: they are both killed. The losses are particularly high and the defense on the western shore of the bridge threatens to give way.

Recognizing that the anti-tank team that fell as a result of a firing incident left bazooka rockets in position, para Marcus Heim moved, recovered what he needed and found his shipper, Gordon Pryne : They manage to destroy the third tank, thus halting the violent German charge along the road of La Fière. Around 8 pm, Lieutenant-Colonel Maloney reinforced the area with a hundred men taken from the defensive position of Chef-du-Pont.

On June 7, 1944, the defensive position of La Fière was reinforced by the 1st battalion of the 325th Glider Infantry Regiment (GIR). Although the sector is constantly bombarded by the Germans, the Americans are not particularly concerned about this sector they consider to be well held by Lindquist and Maloney.

On June 9, the offensive to the west was relaunched with the intervention of 1/325th GIR commanded by Major Teddy H. Sanford at that time. But this first action fails; The 3rd battalion of the 325th GIR (armed by soldiers belonging to the 2nd battalion of the 401st GIR) renews the assault immediately after a fifteen-minute artillery barrage between 10.30 am and 10.45 am The crossing of the roadway is slow and The airborne soldiers recorded heavy losses, the axis being beaten by the fires of the adversary. To add to the mess of mortar and machine-gun fire, a Sherman tank is hit by an American mine that has not been picked up by the paratroopers, cluttering the little road. It was at this point that Private Charles N. DeGlopper of company C of the 325th GIR carried out a heroic action at the western exit of the roadway, covering by fire the movement of his comrades, at the peril of his life. Gradually and painfully, the sections reached the west bank of the Merderet and settled in defensive in front of the hamlet of Motey.

On June 10th at 4 o’clock in the morning, the 357th Infantry Regiment belonging to the 90th Infantry Division crossed the causeway of La Fière, which was still exposed to German artillery. The arrival of these reinforcements makes it possible to accentuate the pressure exerted on the opposing forces which are gradually obliged to retreat and to reorganize, thus removing the threat on the road of La Fière. 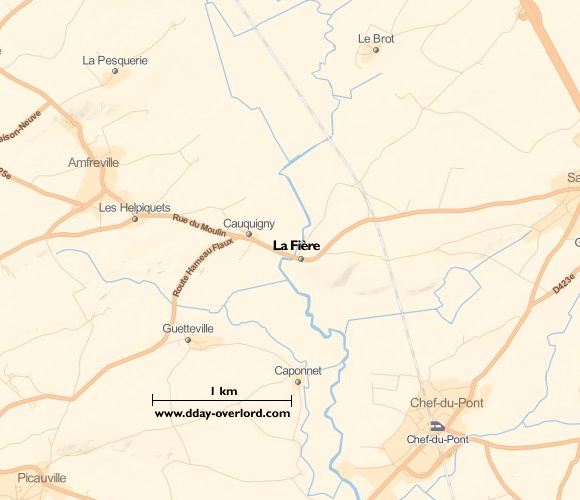