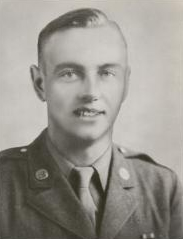 On June 9, 1944, its section was at the head of the column and progressed under fire to install a bridgehead west of La Fière causeway, three kilometers west of Sainte-Mère-Eglise. At dawn, his unit was the only one to have penetrated the enemy’s defense lines, undergoing the firing of light weapons and heavy machine-guns. Isolated from the rest of the company at the height of the village of Cauquigny, its section is taken by forces much superior in number who begin a maneuver of encirclement to obtain views plunging on the ditch in which the airborne soldiers are stationed.

Aware of this threat, DeGlopper, a first-class soldier, volunteered to support his comrades with his BA rifle while they hid behind a hedge about forty yards behind. Seeking to get the concentration of the German shots on him, he progressed along the ditch to the road, totally uncovered, and retaliated in the direction of the opposing positions. Touched, however, he continues to open fire with his submachine gun. Once again hit by a bullet he falls but with a determination and a combativity pushed to the extreme, he kneels down on the road. Very weakened by his serious injuries, he raised his imposing weapon and multiplied the gusts until being killed net by an opposing bullet.

He managed to prevent the enemy from concentrating his attention on his comrades who were able to continue the fight from a favorable position and thus install the first true bridgehead across the causeway of the Merderet. In the fighting area where Charles DeGlopper was killed, his comrades discovered on the ground many machine guns and automatic weapons as well as the body of several German soldiers, killed by the volunteer soldier.

Bravery and extraordinary heroism in the face of an insurmountable obstacle which he demonstrated played a very important tactical victory during the Battle of Normandy.

For his work of June 9, 1944, Private Charles N. DeGlopper was posthumously decorated with the Medal of Honor, the highest honor for an American military.