The commune of La Haye-du-Puits is occupied by the Germans as of June 17, 1940 at 22 hours. It was bombed several times before its liberation starting on 7 June 1944 at 8 pm.

At the beginning of July 1944, the Americans continued their offensive in the direction of La Haye-du-Puits, but the torrential rains which fall in the region do not support the advance by the aviation.

At the dawn of 5 July, Major General Ira T. Wyche, commander of the 79th Infantry Division, ordered Colonel Rabinson to launch the assault to capture La Haye-du-Puits. The 314th Infantry Regiment (IR) begins the offensive but the advanced company is slowed down by multiple mined obstacles fired by fires that prohibit any crossing. In the middle of the morning, Wyche asked the 313th IR, commanded by Colonel Sterling A. Wood, to bypass the city by the south-west but the ground as opposed counter-attacks put an end to any advance before the fall of the night.

On 6 July, the offensive to seize La Haye-du-Puits resumed. The 314th IR, already in position to the north of the city, is ordered to bypass its periphery by the west while the 313th IR storms a hill to the south-west, at the point rated 84. The fact of 314th IR, Gradually encircle La Haye-du-Puits tactically forces the Germans to retreat further south in order to avoid being cut off from their own lines. But they were not reinforced by elements of the SS Panzer-Division “Das Reich”, the Germans did not retreat under any pretext and prepared instead a counter-attack to stop this maneuver bypass. They start it on the afternoon of July 7th and the offensive is so violent that the soldiers of the 79th Infantry Division are obliged to withdraw before gradually regaining the ascendancy at dusk. The counter-attack stops when it is completely dark. During this terrible day of fighting, the American losses are terribly high and the division loses 1,000 of its own.

On July 8th in the afternoon, the Americans renewed the attack on a terrain that is covered by very many German mines. Engineers must clear the gates, while the infantry, supported by the tanks of the 749th Tank Battalion, are caught by enemy artillery fire. Despite a slow and difficult progression, the 79th Infantry Division reached the first settlements north-west of La Haye-du-Puits in the early evening. Many officers are killed and the units are commanded by non-commissioned officers taking excellent initiatives. All day of July 9 is necessary to seize the entire city which is largely destroyed by the bombings of the past weeks. 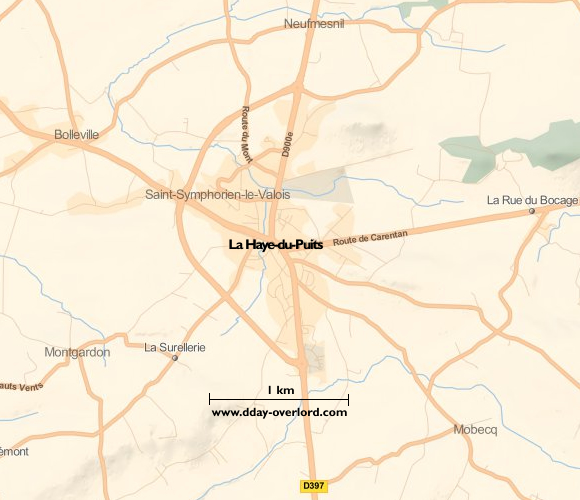