In the spring of 1944, the town of La Madeleine was occupied by the 3rd company of the Grenadier-Regiment 919 (709. Infanterie Division), commanded by the Oberleutnant Matz. The village houses the Wn 7 strongpoint (also known as Wn 105), which consists of several machine guns positions and houses Oberleutnant Matz command post. In 1944, La Madeleine is located on the only road parallel to the beach and is the link between two departmental roads (D67 and D913).

On the beach, at the place called La Grande Dune, the Germans installed the strongpoint Wn 5 (also known as Wn 104). The latter is placed under the authority of the Leutnant Yahnke belonging also to the 3rd company of Grenadier-Regiment 919. This strongpoint defends the access to the road leading to the village of Sainte-Marie-du-Mont. Protected by an anti-tank wall on which is constructed a casemate for 50 mm gun, the Wn 5 consists of two other 50 mm guns, a 47 mm anti-tank gun, a French tank turret FT 17 of 37 mm, For 50 mm mortar, three machine-gun burials and numerous shelters and ammunition bunkers. The entire site is protected by an extensive network of mines and barbed wire.

To the south of La Madeleine, behind the Wn 5, the Germans built another strongpoint, coded Wn 4 (also known as Wn 103) but which was not operational at the time of the landing. However, the Germans use it to protect themselves during the Allied bombing.

According to plans originally planned, the Allies plan to land their troops north-east of La Madeleine, on the area called “Utah Beach”. Utah beach is divided into two sub-sectors: “Tare Green” to the north and “Uncle Red” to the south. But on June 6, 1944, strong currents deviated the boats 2,500 meters to the south. On D-Day, the Americans land east of La Madeleine, opposite Wn 5. Their right flank faces the axis of the 913 departmental road. The first wave reaching Normandy at 6:30 am consists of 20 landing craft carrying the first elements of the 8th Infantry Regiment commanded by Colonel Francis F. Fainter. Companies B and C land on Tare Green, companies E and F on Uncle Red. Ten minutes later, amphibious tanks of the 70th Tank Battalion (4th Infantry Division), led by Lieutenant-Colonel John C. Welborn, landed to destroy the resistance points along the beach. The C Company of the 8th Infantry Regiment commanded by Captain Robert Crisson mounted the assault of Wn 5 and took it without difficulty. The engineers of the 1st Engineer Special Brigade under the orders of General James E. Wharton immediately set to work to clear the beach obstacles, thus facilitating the continuation of the landing operations.

B Company of the 8th Infantry Regiment, commanded by Lieutenant Gail Lee, crosses the anti-tank wall and the dunes at 9 o’clock and heads inland for the German positions at Wn 7. The US soldiers are supported by the 70th Tank Battalion tanks commanded by Lieutenant-Colonel John C. Welborn. However, the aerial bombardments and shots of the Allied navy deeply disorganized the opposing defense and the men of the Oberleutnant Matz are not able to offer special resistance.

The Americans seized La Madeleine in the middle of the morning and then moved inland. 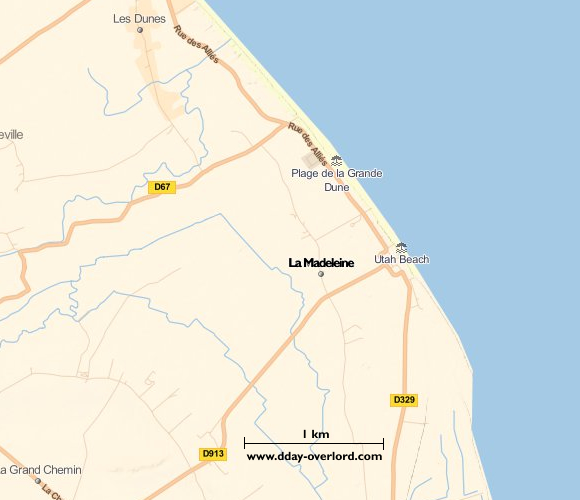