While the Canadians of the 7th Infantry Brigade (3rd Infantry Division) seized difficulties with Putot-en-Bessin on 8 June 1944, a new offensive was decided a few days later to control the end of the Mue valley, A talweg that the Germans borrow to strengthen the front line while being protected from the sights. The Canadian forces must seize the villages of Mesnil-Patry and Cheux in order to block the road while enlarging the allied bridgehead.

The attack is scheduled to start on the afternoon of 11 June at 1430 hours and the units responsible for taking part in the offensive are notified the same day at 0800 hours. The 8th Canadian Infantry’s Queen’s Own Rifles of Canada regiment is responsible for seizing Mesnil-Patry, supported by the 1st Canadian Armored Brigade (1st Hussars) tanks. Soldiers from company D climbed into the B squadron’s tanks and began to advance from the northeast of the village through open terrain where protections were lacking. The Germans of the SS Panzergrenadier-Regiment 26 (SS Panzer-Division “Hitlerjugend”), who expected an allied attack in this area following the recovery of communications codes, immediately opened fire, causing heavy casualties. The Canadian ranks. Mortar shells rain on the assailants. Despite the difficulties encountered, infantrymen and armored vehicles managed to reach the immediate vicinity of Mesnil-Patry and very short-range combat began immediately for the control of the houses.

But the 12th Panzer-Division counterattacked and deployed the SS Panzer-Regiment 12: the Canadians could no longer stand, and Lieutenant-Colonel RJ Colwell, commander of the 1st Hussars, ordered his tanks to fall back on the line. departure. The infantry do the same. However, B squadron was totally disorganized and the order did not reach the Canadians who were totally fixed by the opponent: only two Sherman tanks returned to Norrey-en-Bessin from where they left. During this violent engagement, the 1st Hussars lost 59 killed, 2 missing, 2 wounded and 11 prisoners. 51 of his tanks are destroyed and his squadron B is completely annihilated. The Queen’s Own Rifles of Canada recorded 55 killed, 33 wounded and 11 prisoners. 4 of these prisoners (Corporal Estel Cook, soldiers Ernest Cranfield and Gerald Willet of the Queen’s Own Rifles of Canada and Private Clayton Perry of the 1st Hussars) were interrogated by members of the SS Panzerpionier-Battalion 12 and moved to the vicinity Of Mouen where they are executed.

After the retreat of the Canadians, the Germans reinforced the defenses of the small municipality and install numerous fields of mines. Finally, Canadian troops entered Le Mesnil-Patry during the night from the 17th to 18th June. 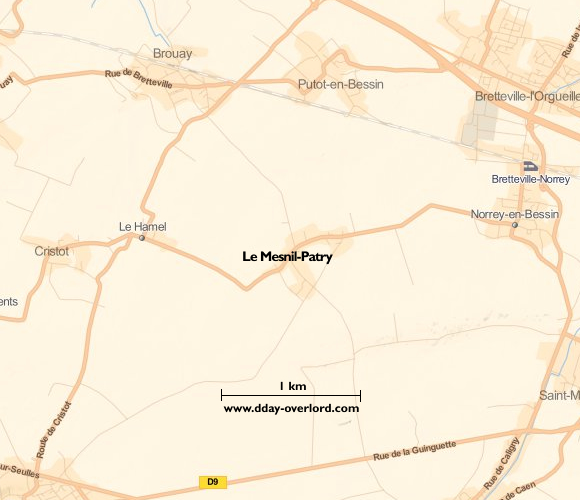