In the spring of 1944, the towns of Le Molay and Littry formed two distinct villages. Three kilometers to the northwest is the Molay castle garden where the Germans begin the installation of a launch site for V1 and V2 rockets, but which is not operational on D-Day. Near the church of Saint Germain de Littry is the staff of the 352. Infantry Division of the Generalleutnant Dietrich Kraiss. This command post, on a street in Carrefour Lacroix, is the objective of an air bombardment launched on June 7, 1944 by the Americans, which resulted in the death of eight civilians.

On June 8, 1944, the P-47 Thunderbolt fighter bombers of the 506th, 507th and 508th Squadrons (404th Fighter Group, 84th Fighter Wing, 9th Air Force) reconnoitered artillery positions in the Mollay Wood, but without success. On June 10, at 7:47 am, the same aircraft renewed the action with more luck: they attacked the Grenadier-Regiment 916 Germans which fell back. On the same day, the Americans of the 2nd Infantry Division seized the two villages of Le Molay and Littry and jostled the opponent. The latter is totally disorganized and folds in an indescribable disorder because of its many losses recorded since the beginning of the landing.

From June 20 to 30, 1944, the 834th Engineer Aviation Battalion built an airfield northeast of Molay-Littry which is named ALG A-9. It is mainly used as a center for aerial photography (with the 17th Signal Operation Battalion) and as a depot of maintenance equipment for allied aviation (with the 16th Air Depot Group belonging to the 2nd Advanced Air Depot Area). Instead of carrying the Cargo denomination letter “C” as originally intended, the aerodrome then receives the letter “D” for “Depot”. It still retains a mission to transport authorities because of its proximity to the Montgomery headquarters east of Blay. Gigantic prefabricated Butler-type hangars and semi-Romney hangars are mounted in the technical area of ​​the aerodrome for storage of means of refueling and accommodation of personnel. The ALG A-9 D, which mainly houses the 67th Tactical Reconnaissance Group during the Battle of Normandy, remained operational until October 5, 1944. 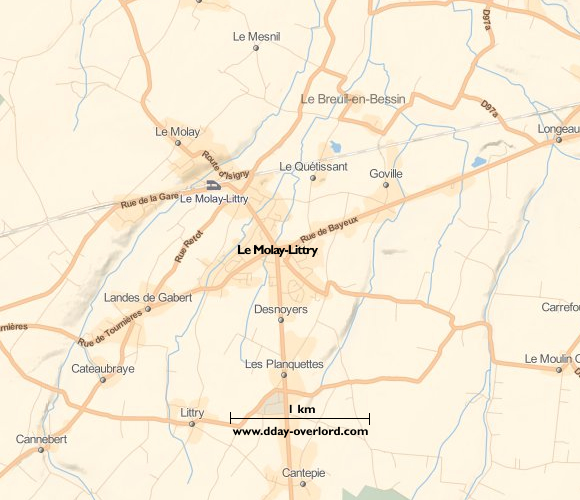