The commune of Pont de la Roque was the object of a first allied bombardment on April 23, 1944. The bombers aim at the stone bridge built on the coastal river of Siena. Nearly 20 air raids were launched to destroy the bridge and it was not until mid-June that three of the eleven arches were destroyed by the bombs.

As of July 28th, the 4th Armored Division commanded by Major General John Shirley Wood is engaged in the first step towards Coutances. The Combat Command A (CCA) under the command of Brigadier General B. C. Clarke progresses rapidly on the right flank of the armored division, not encountering any particular resistance from the Germans who are busy retreating. Three kilometers northwest of Coutances, the CCA stops its progression for the night. On the morning of the 29th of July, the armored vehicles resumed their route towards the commune of Pont de la Roque. When the elements of the CCA approach the outskirts of Siena, they are attacked by small arms fire: the Germans have retreated south of the coastal river and want to prevent its crossing. At the end of the day, the Americans launched an offensive and, in spite of losses, they managed to establish a solid bridgehead on the other side and covered the work of the sappers who began the installation of a temporary Bailey bridge. In place by near the vestiges of the stone bridge. Once completed, it allows American forces vehicles to continue their advance towards the southwest of Cotentin.

The Bailey Bridge was replaced in 1967 by a modern work. 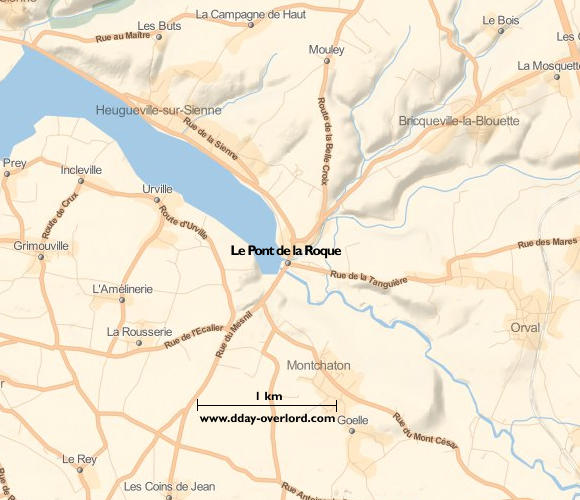