In the spring of 1944, the commune of Les Pieux in the Cotentin Peninsula is home to the command post of Pioneer-Battalion 243 (243. Infantry Division) commanded by Major Hans Moser.

On 19 June 1944, the day after the liberation of Barneville-sur-Mer, which enabled the isolation of nearly 40,000 German soldiers north of the Cotentin, the Americans launched a new offensive towards the north and the 60th Infantry Regiment 9th Infantry Division) commanded by Colonel Frederick J. de Rohan who is in charge of seizing the town of Les Pieux. He has motorized patrols sent to reconnoitre enemy positions.

The 1st Battalion, supported by 746th Tank Battalion Squadron B, and 899th Tank Destroyer Battalion, reached the outskirts of Les Pieux at 5.30 pm and initial information suggests that the Germans abandoned position. In the early evening, the Americans made the connection with a French lieutenant of the French Forces of the Interior (FFI) who announces the capture of about forty German soldiers.

The men of Frederick J. de Rohan seize the village without fight and receive the prisoners at nightfall. The FFI then transmit information on the last known positions of the Germans who have withdrawn to the north. 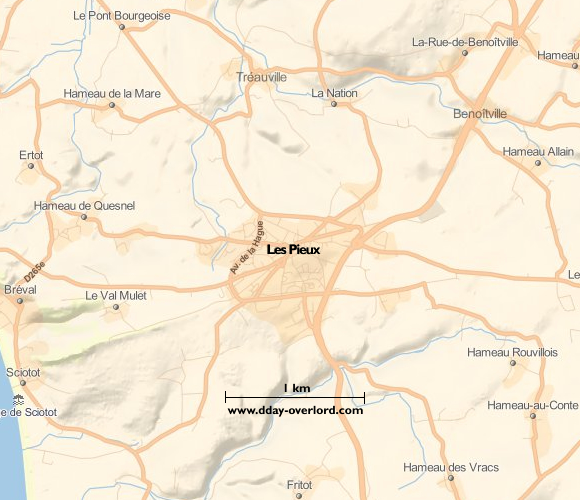