Lingèvres in 1944 – Calvados – Battle of Normandy

On 10 June 1944, the British launched a naval artillery fire by the light cruiser HMS Orion. Despite this deluge of fire and steel, the Germans hold fast. The next day, June 11, 22nd Armored Brigade of Brigadier W. R. N. Hinde belonging to the 7th Armored Division approached Lingèvres by the north. Squadron A of the 5th Royal Tank Regiment supports the infantry of Company I of the 1st Battalion Rifle Brigade in the Lingèvres Forest: the tanks are taken to task by German tanks while an ambush is stretched to the English soldiers in the forest. These elements fell and the order was given at noon to the 2nd Battalion Essex Regiment (56th Infantry Brigade), then located in the village of Bernières about 2 kilometers north-west, to seize the forest of Lingèvres Era located near the farm of the Verrières). Guided by the corps commander of 2nd Battalion Essex, Lieutenant-Colonel J. F. Higson, companies A (left) and C (right) are in the first step, companies B and D in second step.

While the British were engaged in the discovery north of Lingèvres, the Germans opened fire with their machine guns, artillery and tanks (including two Panther tanks); The wounded and the dead litter the battlefield and the soldiers rush to the shelter in the forest. Two Messerschmit BF 109 fighter ships flying low and strafing the Company A sector. Lieutenant-Colonel Higson ordered his men to cover and dig battle holes to spend the night; SdKfz 251 with flamethrowers attacked the English positions but when one of the vehicles was destroyed, the others fell back. During the night, General E. C. Pepper (commander of the 56th Infantry Brigade) set up several artillery supports in support of the withdrawal of the 2nd Essex which begins at the first light of 12 June and lasts all day. The regiment lost 150 soldiers during this engagement (killed, wounded, or taken prisoner), and on command, the Lieutenant-Colonel was relieved of his duties and replaced by his deputy, Major Elliott.

The British reorganized the front line in this area and on 13 June the 151st Infantry Brigade (50th Infantry Division) was in charge of seizing Lingèvres. The English soldiers of the 9th Battalion Durham Light Infantry Regiment commanded by Lieutenant-Colonel H. Woods reached the northern edge of the forest and in the evening a reconnaissance patrol composed of elements from company B was deployed in the direction of the forest To inform about the defensive device of the opponent; These infantrymen are supported by Sherman tanks of the 4th/7th Dragoons Guard (8th Armored Brigade). The Germans opened fire on their approach and managed to destroy two Shermans while inflicting severe losses on company B (Major Kenny, unit commander, was wounded and three officers were killed).

The following day, 14 June, the Lingèvres forest attack began at 10.15 am with an imposing artillery fire, plus air strikes by Spitfire fighters (10 rockets were fired). The foot soldiers of the 9th Battalion Durham climbed to the forest, supported by the Shermans belonging to the 4th / 7th Dragoons Guard A Company. Companies A (left) and C (right) are at the head of the scheme. The progression begins smoothly but quickly, the Germans react: a tank camouflaged in the edge opens fire and destroys a Sherman, then the whole edge shoots fire in the direction of the discovery crossed by the English. In a few minutes, all the regimental cadres were put out of action and Lieutenant-Colonel Woods became one of the only officers still able to command. Woods radioed his deputy, Major John Mogg, and ordered him to send companies B and D to the village. Soon after, a mortar shell broke out near Lieutenant-Colonel Woods, wounding him mortally. John Mogg immediately took command of the regiment.

Companies B and D advance to Verrieres supported by the 4th platoon (4th/7th Dragoons Guard) commanded by Lieutenant Alastair Morrison. The tanks opened fire with all their armament in endowment to silence the German sharpshooters who inflicted losses in the ranks of the English infantrymen. The 9th Battalion Durham having succeeded in seizing the first settlements, German shells fell on Lingèvres. The defenders of the Panzer-Lehr retreat outside the village and Lieutenant Morrison’s tanks immediately secured the approaches around noon. Major Mogg in turn reached the village and set up a rescue station in the church and then organized the defense. The Sherman Firefly tank, commanded by Sergeant W. Harris, detects a German Panther approaching about 900 meters and opens the fire: the 76.2 mm shell stops Armored vehicle without destroying it. When the crew pulls out of the box, the foot soldiers neutralize the personnel and then destroy the tank with a PIAT rocket. Around 12:30, another Panther tank appeared on the road to Tilly-sur-Seulles and Sergeant Harris hired it about 650 meters away and the German tank immediately fired. Harris changed his firing position and moments later a third tank approached on the same road, stopping behind the carcasses of the two Panther: he fired explosive shells at the village and touched the Corporal Johnson’s Sherman positioned face to North-east. The wounded managed to escape from the tank before the German armored car gave the coup de grace. Shortly afterwards, the second platoon of Firefly tanks arrived reinforcing the Lingèvres position.

Around 4:30 pm, a Tiger tank was detected by Captain John Stirling with his Sherman tank and he fired three AP shells into a turret: the Tiger caught fire. Two minutes later, three new Panthers were detected and Sergeant Harris hired them. The first one catches fire, the second is touched but continues to advance (without being able to orient himself) and the third, touched in turn, explodes. The second Panther finishes his race near the church of Lingèvres and his crew abandon him. With five shells, pointer-shooter D. Mackillop commanded by Sergeant Harris destroyed five Panther!

At 5.50 pm, the Germans launched a new counter-attack with infantry and the British underwent an impressive concentration of fires. At 1920 hours, the Royal Air Force’s Spitfire fighter patrols around Lingèvres and bombarded several opposing positions before nightfall, ending the German counter-offensive.

From August 1st to 6th, 1944, 5357th Airfield Construction Wing built an aerodrome on the lands of the commune of Lingèvres and is named ALG B-19. It serves as the main base for the 125 Wing and remains operational until September 9, 1944. 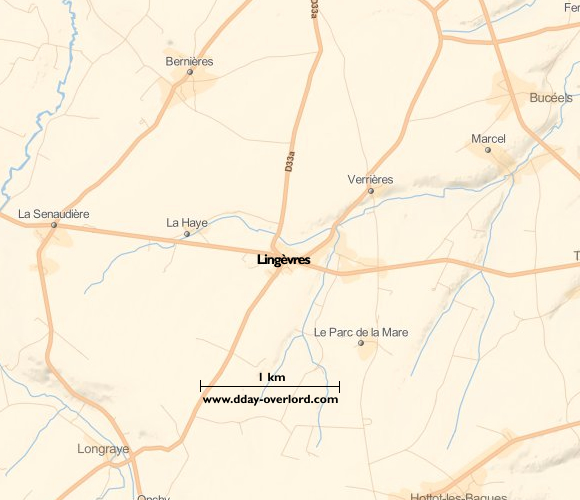