The commune of Lion-sur-Mer in Calvados was occupied in 1944 by the 10th company under the command of Hauptmann (captain) Heinrich Kuhtz, belonging to the Grenadier-Regiment 736 (716. Infanterie-Division). The beach is directly defended by a strongpoint located to the west of the village and coded Wn 21 which includes several shelters and ammunition bunkers, two auxiliary observatories working for the Colleville-sur-Orne battery (Wn 16) As well as a 75 mm gun, two 50 mm KWK L/60 anti-tank guns and a 81.4 mm mortar (Gr.W 34).

Given the size of the locality, the Allies do not plan to land directly in front of the commune of Lion-sur-Mer but they want to take a foot first about 500 meters further east to La Brèche d’Hermanville (where the density of dwellings is smaller) then in a second time seize the commune of Lion by a turning movement. British Navy’s No.41 Royal Marine Commando (4th Special Service Brigade) are responsible for carrying out this maneuver on D-Day. They received several missions: to seize Wn 21 strongpoint, baptized “position Trout” by the Allies, to seize the castle of the Haut-Lion supposed to contain a German Staff, to make the connection with the No.48 Royal Marine Commando in the area of ​​Petit-Enfer, near Luc-sur-Mer, in order to connect the two areas of beaches Sword and Juno, and finally to seize the radar station of Douvres-la-Délivrande.

Before the infantry arrived on Sword Beach, the allied warships were ordered to bombard the Trout position. No.41 Royal Marine Commando (RMC), commanded by Lieutenant-Colonel T.M. Gray, landed at 8:45 am at the western end of the beach area called Queen White, which is located at the west end of Sword Beach. The British commandos are supported by Company A of the 1st Battalion South Lancashire Regiment (8th Infantry Brigade) commanded by Lieutenant R. W. Pearce (Major Harward was killed a few minutes ago) and special tanks. At 0940 hours, almost one hour after landing, the No. 41 RMC already recorded heavy losses. Nevertheless, they start their progression towards Lion-sur-Mer. Civilians gave valuable information to the British, noting that the Germans had retreated around 7 am. Gray divides his unit into two columns: one directed towards Wn 21 strongpoint (Troop P and Troop Y), the other towards the castle (Troop A and Troop B).

The Troop P illuminates the progression towards the “Trout” fulcrum, supported by the Troop Y and company A of the 1st Lancs. The first elements of the Troop P are fixed in front of the Wn 21 when three special tanks A.V.R.E. Came to support the British at 10:50 am: the latter were committed to the preparation of the assault to be carried out by the Troop Y, but in only five minutes the three tanks were destroyed by a 50 mm gun. At the same time, the Germans carried out a mortar fire on the No. 41 RMC and Captain P. T. H. Dufton, commander of the Troop Y, was killed. In the early afternoon, Troop X survivors reinforce the Troop Y.

At 4 pm, the English commandos were stationed in front of the “Trout” fulcrum and the castle, undergoing regular artillery fire on their positions. The reinforcements of the 9th Infantry Brigade landed at La Brèche allow a reorganization of the front line and the soldiers make the point before night: the No.41 RMC lost 140 soldiers (killed, wounded, disappeared or prisoners) in This first day, a loss rate close to 50%. The Allied navy bombarded the entrenched German positions at 1800 hours.

Around 7 pm, elements of the 1st Panzergrenadier-Regiment 192 battalion and the 1st Panzer-Regiment 22 battalion (21 Panzer-Division) managed to reconnoitre to the western outskirts of Lion-sur-Mer and A device allied until 9 pm, taking advantage of the difficulties encountered by Anglo-Canadians in linking the two Juno and Sword beaches. When British planes and planes fly over the area shortly before 9 pm as part of Operation Mallard, the Germans decide to withdraw to Caen so as not to be cut off from the rest of their units.

On June 7, 1944, after a relatively quiet night, No.41 RMC was attached to the 9th Infantry Brigade for the continuation of the fighting and, in view of its losses, was placed in support. At 3:36 pm, the 2nd Battalion Lincolnshire Regiment ascended the castle and seized it, losing a soldier during the attack and making two German prisoners: most of their opponents had withdrawn before. At 6:20 pm, the No.41 RMC started up in the direction of Luc-sur-Mer and the commandos made the junction with the troops coming from of Juno. 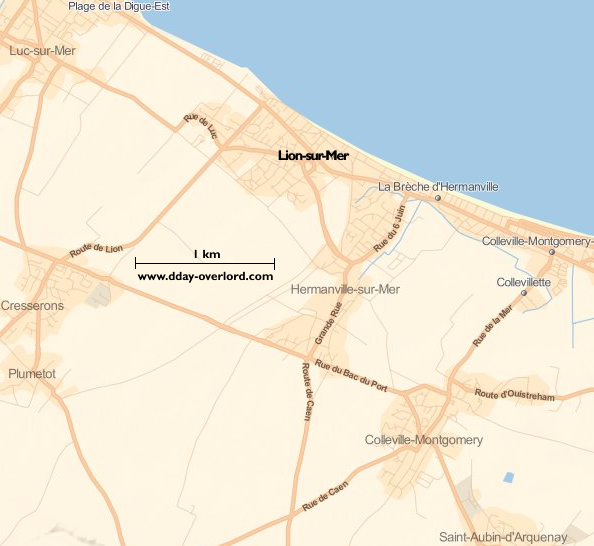