In the spring of 1944, the municipality of Lison is known for its junction station which is located 1500 meters south of the village. Located on the Caen-Cherbourg railway line, it also allows to reach Saint-Lô and then Brittany. The station was thus the subject of numerous allied bombardments before the D-Day but also after disembarkation to halt the supply and reinforcement of German forces by rail.

After the liberation of Isigny during the night of June 8-9, 1944, the 175th Infantry Regiment (29th Infantry Division) commanded by Colonel Paul R. Goode set off southward at 10:05 am, supported by Tanks of the 747th Tank Battalion. The 3rd battalion commanded by Lieutenant-Colonel Edward A. Gill moved ahead, followed by the General Staff, the 1st Battalion and the 2nd Battalion. Two kilometers north of Lison, gunshots were exchanged with artillerymen of the 352. Infantry Division fighting as foot soldiers, camouflaged in trenches, alongside soldiers belonging to the 513. Schnelle-Abteilung ( 30 Schnelle Brigade). About 125 gunners and 30 soldiers of 513. Schnelle-Abteilung are killed during this engagement.

The first vehicles of the 747th Tank Battalion reach Lison around noon but are caught in artillery fire. At 18 o’clock, the 175th Infantry Regiment reached Lison and took possession of it. From that moment until the following evening, Colonel Goode’s soldiers consolidated the defensive perimeter in the area of ​​Lison.

Shortly after the release of Lison, as of 24 June, the Americans began work to restore the station. A detachment of the 1055th Engineer Port Construction and Repair Group hires local workers for this operation. From June 26, three locomotives were moved from Lison to Isigny, the first railway run by the Allied forces on the liberation of the European continent. At the same time, the 390th and 392nd Engineer Special Service Regiments rehabilitated the railway line between Lison and Cherbourg, in order to allow the supply of the front and the evacuation of the wounded by railway convoys. 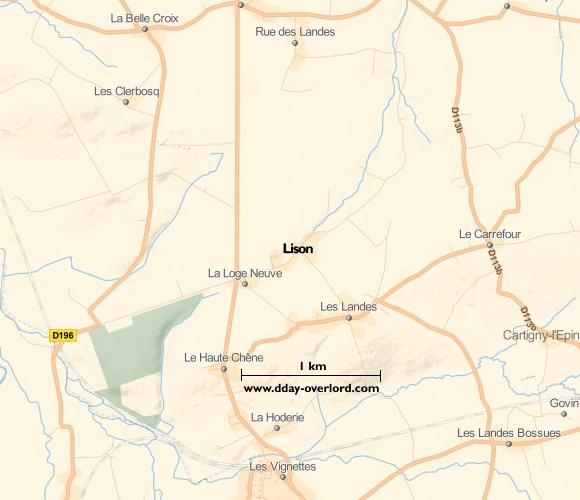