Early July 1944, the British had not yet seized Caen. General Montgomery launched several operations to break the German defense line but without major successes: his opponents resisted despite the abundance of bombing and the means committed.

On July 8, 1944, a new offensive began, called Operation Charnwood, preceded by one of the most violent aerial bombardments of the Battle of Normandy. The municipality of Maltot is the last objective of the 130th Infantry Brigade (43rd “Wessex” Infantry Division) to control several points on the Odon to the southwest of Caen. But the Germans of the 10.S. Panzer-Division “Frundsberg” offer a fierce resistance and the British struggle to break through the front line.

The British began their attack at 8.15, the offensive being preceded by a violent artillery fire. The 7th Battalion, Hampshire Regiment progresses supported by the tanks of the 44th Royal Tank Regiment and losses are numerous from the first minutes of the assault. However, the infantrymen managed to reach Maltot and the operation seemed to be a success. But the Germans of the 11th SS Panzer-Grenadier-Regiment 1 (1. SS Panzer-Division Leibstandarte Adolf Hitler) commanded by the Obersturmführer Frank Hasse counterattack, and moments later Tiger tanks suddenly appear in the streets Of the village, hitherto hidden on the outskirts of the municipality, and elements of the first company of the Schwere SS Panzer Abteilung 101 are also engaged in the battle, which is supported by armored firepower and positions despite the commitment of the 4th Battalion, the Dorsetshire Regiment, the British are obliged to withdraw to the north and abandon the hope of seizing Maltot that day.

On 15 July, Operation Greenline is launched. Aiming to fix the Germans in the area of ​​Caen in order to allow the Americans to succeed Operation Cobra in the south of Cotentin. It is the 4th Battalion Wiltshire Regiment (129th Infantry Brigade), supported by the tanks of the 7th Royal Tank Regiment, which seizes Maltot July 22, partially destroyed by the bombing.

The Maltot castle falls into British hands the next morning. 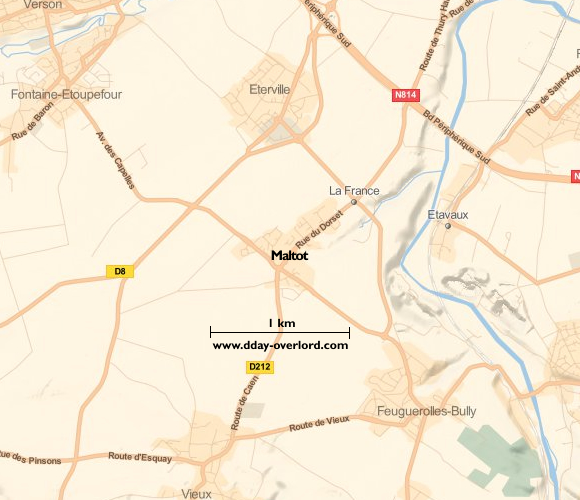