On July 24, 1944, the Americans launched Operation Cobra to pierce the front line south of Cotentin: 1,600 bombers of the 8th U.S. Air Force are engaged and the launch of the offensive begins the next day. On 25 July at 9.40 am, a new air raid was launched with the release of 3,300 tons of bombs and by 11 am the ground units launched an assault. Slowed by an unexpected German resistance given the amount of bombs fallen in the area, the Americans temporarily stop their assault at nightfall.

On 26 July, the US air force flies over the area, and the P-47 Thunderbolts make numerous strikes at Marigny. The armored 3rd Armored Division then relaunched the offensive in the morning against the Panzer-Lehr-Division, the 17. SS Panzer-Division “Götz von Berlichingen” and the 353. Infantry Division. During the afternoon, two squadrons of the SS Panzer-Division “Das Reich” reinforced by elements of the 353 Infantry Division counterattack American tanks located in the outskirts of Marigny: the 18th Infantry Regiment 1st Infantry Regiment) commanded by Colonel George Smith, Jr. (resisting the tanks), resisted despite repeated assaults and engaged in heavy fighting in the ruins of the village until finally seizing the town in late afternoon, afternoon. The roads, encumbered by German vehicles destroyed, are cleared by the American bulldozers.

After the fighting, Marigny welcomed the remains of 3,070 American soldiers (mainly belonging to the VII Corps) and 4,246 German soldiers who were buried to the north of the commune. In 1946, the bodies of the American soldiers were transferred to the military cemetery of Colleville-sur-Mer and the site was laid out from 1958 to 1961 to receive the remains of other German soldiers killed in the region. A total of 11,169 German soldiers Nowadays in Marigny. It is in this military cemetery, inaugurated on September 20, 1961, that rests the General der Artillerie Erich Marcks, killed on June 12, 1944 in Hébécrevon. 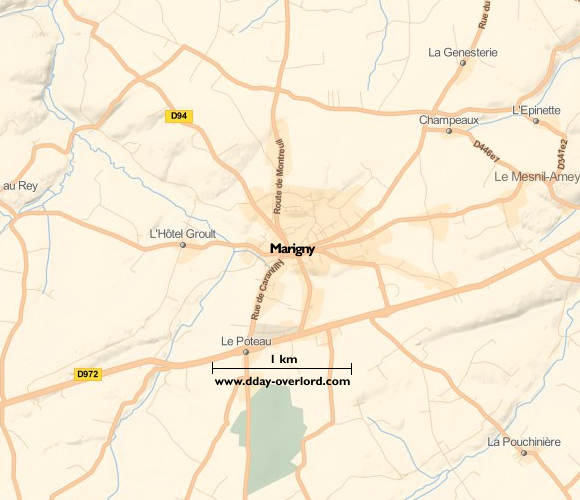