In the aftermath of the Normandy landing, the German paratroopers of the Fallschirmjäger Regiment 6 (91. Infanterie Division) set up a new defensive line to the south at Carentan and set up elements of the reserve in the Méautis sector. 8 inhabitants of the region, suspected by the Germans of having brought food to the American paratroopers who hide in the vicinity, are shot in the village of Méautis.

After their withdrawal south of Carentan, German paratroopers, reinforced by SS-Panzergrenadier Regiment 38 (17 SS Panzer-Division “Götz von Berlichingen”), counter-attack north on 13 June from 10 am Are stopped by the American artillery and the tanks of the 2nd Armored Division. Unable to pierce the front line permanently and suffered very heavy losses, the Germans retreated south of Méautis in the evening. The Americans seized the village a few hours later.

On 26 June, the SS launched a new offensive in the direction of Méautis, which again threatened the village, which was subjected to additional bombardments until the following day, 27 June, but the Germans were once again unable to achieve their objectives. They multiply the counter-attacks and the front line only slowly moves away from the commune. On July 12, 1944, General Theodore Roosevelt Jr., then promoted to head of the 90th (US) Infantry Division and eldest son of President Theodore Roosevelt, suffers from a heart attack in Méautis during a German air attack alert on the position from his headquarter. 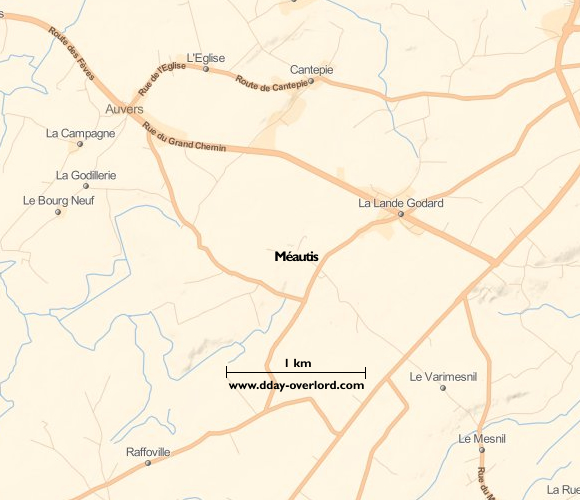