Merville-Franceville in 1944 – Calvados – Battle of Normandy

In 1944, the municipalities of Merville and Franceville were independent.

Throughout the spring of 1944, the Allies bombarded Merville’s battery in hopes of avoiding a ground attack, but the bombs had no effect on the German two-meter-thick bunkers covered with earth. However, on May 19, 1944, Hauptmann (captain) Wolter, commander of the battery, was killed during a raid by the Royal Air Force: he was replaced by Oberleutnant (lieutenant) Raimund Steiner. The German garrison of the Merville battery is strong of 160 soldiers (80 artillerymen belonging to the first battery of 1716. Artillery Regiment and 50 sappers).

The Allies decided to destroy the battery before the amphibious operations began in Operation Tonga. To this end, 700 English paratroopers from the 9th Battalion (3 Para Brigade) under the command of Lieutenant-Colonel Terence Otway gathered at the rendezvous point after their parachuting which took place around 03:00: only 150 of the planned paratroopers Without the necessary heavy equipment. The others are lost in the marshes, the wind pushing them farther west when the jump. Otway, 90 minutes behind the scheduled schedule, launched the assault of the Merville battery at 04:30. Fifteen minutes later, after a particularly violent battle, the mission was a success. At 05:00, the guns (of 100 mm and not of 150 mm as initially envisaged by the Allied command) are neutralized. 70 of his men are unable to fight after the assault: Otway breaks contact and settles in defensive around the castle of Amfreville (which no longer exists), having suffered many losses.

From the 6th to the 8th of June, the Englishmen of the No. 45 Royal Marine Commando of the 1st Special Service Brigade made a reconnaissance from Sallenelles to Merville through Franceville. They engage in fierce fighting against the Germans of the 716. Infantry Division but are pushed back and must retreat to the height of Le Plein.

Between June 8 and August 1944, despite these multiple British interventions, Merville and Franceville remained under the control of the Germans, which were gradually reinforced by the 346. Infanterie-Division.

Despite numerous losses, the Piron brigade managed to seize Franceville shortly after 7:30 p.m. Meanwhile, the companies of the 2nd Battalion Oxfordshire and Buckinghamshire Light Infantry (“Ox & Bucks”) carried out the reconnaissance of the hamlet of Descanneville, plowed by the craters dug by the Allied bombings targeting the Merville battery. The Germans only offered very slight resistance, limited to a few sniper actions, allowing the English soldiers to cross and liberate Merville without difficulty. The paratroopers of the 1st Battalion, Royal Ulster Rifles, reach the Flet de Graye river then join the Piron brigade along the coast road at 8:30 pm The headquarters of the “Ox and Bucks” settles down for the night in the remains of the battery.

The following day, the Belgians and Luxemburgers of the 1st motorized unit hold their position until August 20, in reserve of intervention for the benefit of the 6th Airborne Division. The area was systematically trapped by the Germans and the Allied troops suffered losses in the days following the liberation of the communes during demining operations. 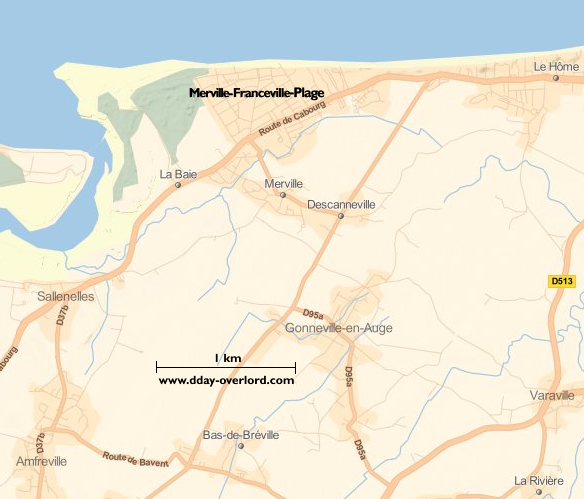