At the beginning of August 1944, the Americans plunged into Britain following the capture of Avranches on July 31st. They quickly realize that the narrow corridor delimited to the west by the sea and the east by the German forces must be imperatively expanded in order to avoid any counter-attack in the sector which would isolate the Brittany units from Those in the Cotentin. The 1st Infantry Division, commanded by Major General Clarence R. Huebner, was ordered on 1 August to seize the town of Mortain in order to continue the offensive east of Avranches while enveloping the forces Which were exceeded in the previous days. The foot soldiers are supported by the 3rd Armored Division’s Combat Command B (CCB). Progressing despite the resistance of elements of the 275. Infantry Division and the assaults of reconnaissance units of the 2. Panzer-Division, they seize Mortain on 3 August. General Huebner immediately secured the heights in the immediate vicinity to the east of the city. From this position, whose top point is 317, the artillerymen made multiple shots on German units routed to the north. On August 4, the Americans intercept German communications related to the imminence of a counter-offensive in the sector: thanks to the Ultra system, they decipher the messages announcing a German operation. The Americans do not alter their plans for the coming days but put the 9th Air Force and the British Air Force of the 2nd Tactical Air Force on alert. At the same time, the Germans were preparing a major offensive called Operation Lüttich: its aim was to reach Avranches to cut American lines in two.

In order to allow the 1st Infantry Division to continue its southeastern offensive, Major General Leland S. Hobbs’ 30th Infantry Division took a position on 6 August in the Mortain area. The town is secured around 8 pm by the 120th Infantry Regiment (120th IR) under the orders of Colonel Hammond Birks. Its first battalion took position on the heights to the west while the second battalion was in position on those located to the east (hill 317). The 1st Army commanded by Lieutenant General Omar Bradley alerted the 30th Infantry Division around midnight, with air reconnaissance east of the front line indicating the concentration of about 5,400 enemy infantrymen. General Hobbs immediately sent a message to Colonel Birks to reinforce his device up to the 317 level, but in the early hours of 7 August 1944 the Germans were already attacking.

Shortly before 3 am, the SS Panzer-Division “Götz von Berlichingen” (under the command of the SS Panzer-Division “Das Reich”) carried out one of its preliminary To know how to reach Mortain with his tanks. The shock was violent and the Germans quickly managed to overrun the 2nd battalion of the 120th IR by the north and the south. The unit, which is under the command of Captain Reynold C. Erichson, is isolated on Hill 317 and resists, as best it can, against the columns of soldiers and enemy vehicles who manage to overcome the obstacles installed on the roads. The losses of the 2nd Battalion are catastrophic and Colonel Birks considers his unit as completely destroyed. But Captain Erichson is backed by Captain Delmont K. Byrn, commander of the heavy weapons company, and his unit commanders (1st lieutenant Ralph A. Kerley, 1st Lieutenant Joseph C. Reaser and 1st Lieutenant Ronal E. Woody, Jr.). They can also count on the work of two advanced artillery observers from the 230th Field Artillery Battalion: 1st Lieutenant Charles A. Barts and 2nd Lieutenant Robert L. Weiss. The 117th Infantry Regiment of Lieutenant-Colonel Walter Johnson deployed his 2nd battalion in reinforcement but the latter did not manage to stop its opponents: the German tanks invested the center of Mortain. At daybreak, the Americans are partly disorganized and many soldiers find themselves isolated from the rest of their unit in the face of the onslaught of the SS forces. While 120th IR survivors retreated to the heights west of Mortain where the first battalion command post was installed, General Bradley ordered Major General Paul W. Baade’s 35th Infantry Division to strengthen the area. The fine weather that makes the early morning fog rise allows the Allied air force to be engaged from midday onwards and the 2nd Tactical Air Force deploys no fewer than 10 Typhoon fighter-bomber squadrons that make 294 sorties to land forces in the area. Sector of Mortain. The intervention of the air forces put an end to the German offensive: the armored crews seek cutlery and stop any progression for fear of being the victim of an allied shooting. The Americans did not manage to regain ascendancy because on the 7th of August alone, the 30th Infantry Division lost 600 men (killed, wounded, disappeared or taken prisoner).

In the days that followed, the front line was blocked at Mortain and the skirmishes multiplied in disorder, the Germans trying to keep the pressure on the Americans so that they could not organize. Survivors of the 2nd Battalion, isolated on Hill 317, are rapidly lacking food and plasma to care for their wounded; Parachutes are planned but the German anti-aircraft defense pushes the aircraft back. Nevertheless, on the afternoon of August 10th, Douglas C-47s managed to drop supplies, which unfortunately fell outside the American-controlled perimeter. The latter may nevertheless rely on the help of Norman peasants who, in spite of the danger, bring fresh food to the soldiers of Captain Erichson. Lieutenant-Colonel Lewis D. Vieman, the corps commander of the 230th Field Artillery Battalion, imagined sending refueling by using the guns of his batteries: he had medical equipment added to the smoke bombs initially intended to spread propaganda tracts . “Supply fire” starts on August 10 as well.

On August 11, 1944, the Germans were ordered to withdraw as Anglo-Canadians attacked in the direction of Falaise and threatened to break through the front line to the south. The retreat takes place at nightfall. The 35th Infantry Division did not arrive in the area of ​​Mortain until 12 August 1944 around noon: it lost nearly 700 men to reach the town. The arrival of these reinforcements allows the 120th Infantry Regiment to infiltrate into the municipality which again passes under American control. Nearly 300 survivors of Hill 317 under the command of Captain Erichson were released from encirclement: 227 soldiers of the second battalion were killed, wounded or taken prisoner during these six days of isolation. 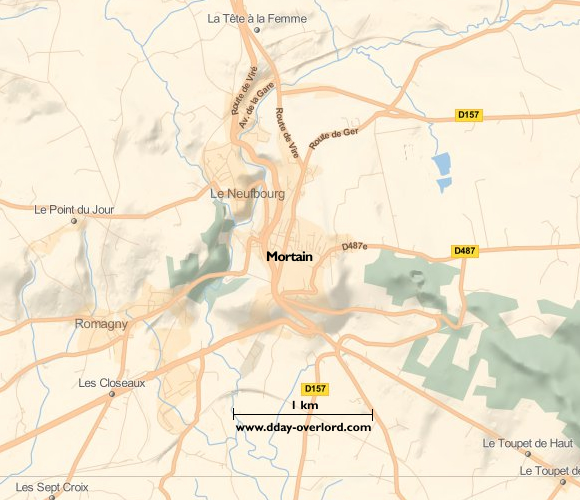