Négreville in 1944 – Manche – Battle of Normandy

In the spring of 1944, the commune of Négreville was occupied by the command post of the Artillerie-Abteilung 456 (91. Infanterie-Division).

On June 6, 1944 at 0232 hours, the Douglas C-47, registered 42-23638, piloted by Lieutenant William R. Hitztaler, was hit by the German antiaircraft artillery above Negreville. Order to jump was immediately given to the 19 paratroopers of the mortar platoon of Company F of the 507th Parachute Infantry Regiment (82nd Airborne Division) expected to be dropped above the “T” drop zone, more than 12 kilometers to the south-east. But Donn W. Commings and Charles George Stout were injured by the explosions and the radio operator, S/Sgt Orlo A. Montgomery, was mortally wounded. The others had just enough time to jump before the crash: the Douglas C-47 crashed at the place of the Clos Neuf, hamlet of Rouville, north-west of Negreville. The remains of at least two bodies were found in the wreckage of the aircraft: the body of Charles George Stout was identified, but Orlo A. Montgomery is still missing.

On 19 June 1944, the day after the liberation of Barneville-sur-Mer, which enabled the isolation of nearly 40,000 German soldiers north of Cotentin, the Americans launched a new offensive towards the north. The tanks of the 4th Cavalry Squadron, stationed in the center of the Cotentin, are in charge to recon the American progression during the morning: the Troop A and the Troop C make a breakthrough of nearly 10 kilometers to Negreville.

In the late afternoon, soldiers from the 313th Infantry Regiment (79th Infantry Division) reached Negreville and then continued north. 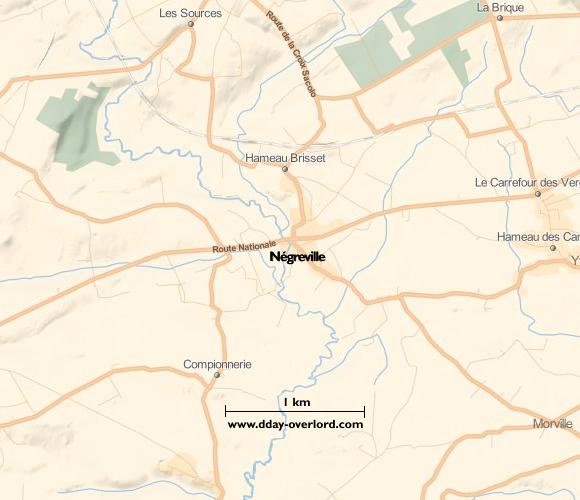