In 1942, the area was occupied by the 320. Infanterie-Division, which had locations on the commune of Ozeville for two 100 mm FH 14/19 howitzers served by the 3rd battery of the Artillery-Regiment 320. In January 1943, this division leaves Normandy and is sent on the front of the east; The 709. Infanterie-Division, which replaces it, recovers through these facilities which are abandoned, deceiving Allied intelligence services: the latter bombard the desert site in 1944.

After the capture of Azeville in the middle of the afternoon of June 9, 1944, General Raymond O. Barton, commander of the 4th Infantry Division, wants to relaunch the progress of his regiments after the difficult fighting to seize the German batteries of Azeville and Crisbecq. To this end, he set up a task force consisting of the 22nd Infantry Regiment, the 746th Tank Battalion and the 899th Tank Destroyer Battalion under the command of General Henry A. Barber. This Task Force starts at 4:30 pm but is stopped on 10 June south of Ozeville by the defense of elements belonging to Grenadier-Regiment 922 (243 Infantry Division).

On 11 June, German positions were attacked by an air raid: General Barber ordered the 3rd battalion of the 22nd Infantry Regiment commanded by Lieutenant-Colonel Arthur S. Teague but it was a failure and the soldiers had to withdraw. US positions are threatened to the south-east by elements of the 3rd Grenadier-Regiment 922 Battalion, which holds the village of Fontenay-sur-Mer as well as the departmental road 14: these elements prevent the Colonel Hervey A. Tribolet’s 22nd Infantry Regiment To carry out regimental coordinated actions in front of Ozeville, the battalions having different missions.

On June 12, the 3rd Battalion stormed the German defenses of Fontenay-sur-Mer, forcing the Germans to retreat north and east: General Barber could now focus on the capture of Ozeville. He requested an air raid at 11 am and an artillery fire on the defenses south of the village from 11.15 to 11.30 hours, which then had to travel north until noon. At 10.05 am, Barber was informed that the air raid could not take place, but that artillery fire was still possible: it was triggered on time. The 22nd Infantry Regiment is reinforced for the occasion by two batteries of 81 mm mortars and a gun support company of the 12th Infantry Regiment. In accordance with Barber’s orders, Major Earl W. Edwards’ 2nd Battalion was installed on the left flank (capable of applying indirect and anti-tank fire) and Lieutenant-Colonel Sewell’s 1st Battalion Mr. Brumby s ‘Installs in support on the right flank (direct support); At noon, Lieutenant-Colonel Teague’s 3rd Battalion attacked in the center, reinforced by the 87th Chemical Mortar Battalion, an anti-tank section and Sherman tanks from Company C of the 70th Tank Battalion. The Germans installed their defenses on the old positions of the Artillery-Regiment 320 battery, reusing the few bunkers still in place.

The 1st battalion was violently attacked on its sector on the northern outskirts of Fontenay-sur-Mer and the 3rd battalion launched an attack: Companies I and L covered the flanks of company K, which reached German positions, Ozeville with two front sections. The exchanges of shots were fueled when suddenly a white flag was detected above the German positions: Lieutenant Dewhurst, the section commander of company I, stood on a bunker to stop the fire but was immediately mowed down by a burst of machine gun. Assistant to the scene, the soldiers of Company I rush with rage on the German positions, using their bayonets, and neutralize part of the garrison.

The liberation of Ozeville was completed on the morning of June 13. 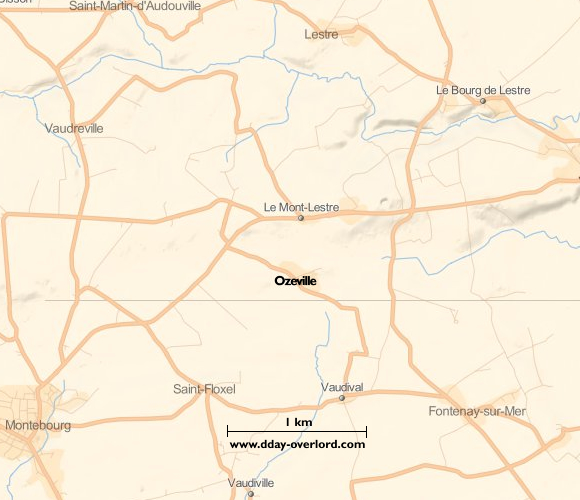