On 8 and 13 June 1944, Périers was subjected to aerial bombardments, the aim of which was to slow the advance of German reinforcements towards the landing beaches. The commune, which represents a very important crossroads of roads in the Cotentin, is largely destroyed by these attacks.

On 15 July 1944, the 359th Infantry Regiment of the 90th Infantry Division was no more than 4 kilometers from Périers. In the days that followed, the area was gradually defended by the 17. SS Panzer-Division “Götz von Berlichingen” while the survivors of the 353. Infantry-Division stand in reserve to the south.

On 24 July, the Americans launched Operation Cobra to pierce the front line south of the Cotentin: 1,600 bombers of the 8th U.S. Air Force are engaged and the launch of the ground offensive begins the next day. On the right flank of the starting base of the operation, the American units are instructed to pin down the opponent to prevent it from containing the breakthrough.

On July 27th, at 9 am, after an important artillery preparation, the 359th Infantry Regiment (IR) commanded by Colonel Robert L. Bacon began its advance towards Périers. The Germans retreated a few hours earlier in favor of the darkness. In the middle of the afternoon, the American soldiers infiltrated Périers, and at 4 pm the 3rd battalion commanded by Lieutenant-Colonel Paul Smithil bypassed the city from the east and reached the 971 road (D971) connecting Périers to Coutances. It crosses the positions already set up a kilometer south of the city by the 90th Reconnaissance Troop and engages the fight against a German resistance point supported by tanks. Colonel Bacon deployed the 1st battalion to the east of the 3rd battalion while the 2nd battalion occupied Périers for the night.

The next day, 28th July, the 359th IR succeeded in penetrating the German defensive system on the D971 road and continued its progress towards the south. 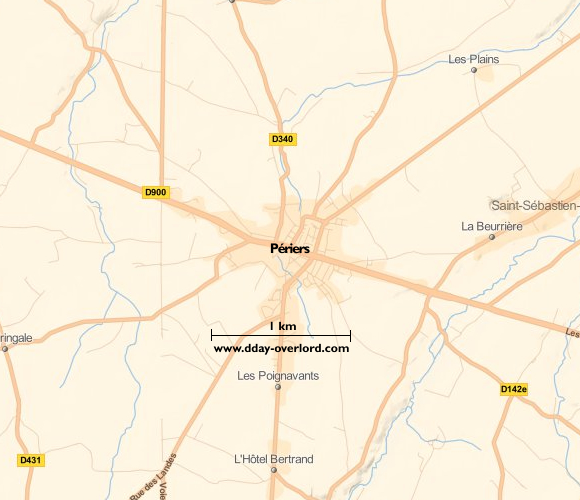