In the spring of 1944, the village of Pont-l’Abbé was placed under the responsibility of Grenadier-Regiment 1058 (91. Infanterie Division). During the preparation phase of Operation Overlord, the Allies place this municipality at the western end of the bridgehead that US paratroopers must control on D-Day. For this purpose, a “drop zone” (DZ) is chosen in the vicinity of Pont-l’Abbé, it is coded “N”. This is the 508th Parachute Infantry Regiment (82nd Airborne Division) commanded by Colonel Roy E. Lindquist who is in charge of seizing the village and destroying the bridge over the Douve.

The Dakota tops the 508th PIR with a good approach to the DZ “N” but the rest of the drivers do not follow, mainly because of the German Flak’s disorganization of the flight formations. The parachuting is carried out between 02:08 and 02:20 at a height that is far too high, at 700 meters of altitude (while that of the 101st Airborne Division is carried out at 150 meters). As a result of the difficulties encountered by the pilots, 33 of the 132 sticks of the 508th PIR land less than a kilometer away from the jump zone. Half of the regiment’s paratroopers (about 65 sticks) are not able to accomplish their mission either because they land more than 15 kilometers from the DZ or because they are completely isolated and lost in the night .

The 508th PIR can not act organically with its three battalions. It is organized into four groups of circumstances: the “L” group led by Colonel Lindquist, the group “W” by Major Warren, the group “S” by Lt. Col. Shanley and the group “G” Headed by two captains, Novak and Simonds, consisting of isolated parachutists encountered at random and ranging in size from about thirty to nearly 200. The Shanley “S” group commanding the 2nd Battalion of the 508th PIR sought several solutions throughout the day to attack the position of Pont-l’Abbé without success: the Germans had considerably strengthened access to the village and its precious bridge and the balance of power was largely unfavorable to the paratroopers. That Pont-l’Abbé represents a gateway to the south of the Cotentin peninsula and hinders as much as possible their opponents.

On June 11, 1944, the 358th Infantry Regiment commanded by Colonel James V. Thompson and belonging to the 90th Infantry Division is less than one kilometer east of Pont-l’Abbé. The three battalions of the regiment began the assault at 1:30 pm behind a rolling artillery barrage issued by the 344th Field Artillery Battalion. Despite this firepower, the Germans retaliated with their heavy machine guns positioned in particular to the north and east of the village, fixing the American progression until dusk. The following day, June 12th, Lieutenant-Colonel William L. Nave, commanding the 1st Battalion of the 358th Infantry Regiment, was ordered to fix the Germans, while the 2nd and 3rd Battalions circumvented Pont-l’Abbé by the north, Attack the village to the west. But the men of Colonel Thompson remained fixed on their starting base, without even being able to perform the maneuver. These shots wound Colonel Thompson and Lieutenant-Colonel William L. Nave; Lieutenant-Colonel Christian H. Clarke, Jr., at the head of the 2nd Battalion, temporarily took command. The Germans counter-attacked in the direction of the 1st battalion, without succeeding in bending the American infantrymen. They are preparing to launch the assault after a particularly violent and effective air raid by several P-47 fighter bombers. But the infantry was slow to mount an assault due to coordination problems: the artillery took over from the air force, waiting for the four companies of the 358th Infantry Regiment to attack, which was carried out at 19 Hours.

The village of Pont-l’Abbé is no more than a field of ruins and the Germans retreated when the Americans seize the village. The infantrymen set up in defensive all around Pont-l’Abbé and the following morning, June 13, Lieutenant-Colonel Clarke launched an offensive towards the west, but the American positions were bombarded at 7 o’clock, neutralizing the advance until noon. At the end of the day, the front line moved only about ten meters to the west. Pont-l’Abbé is definitely out of danger from the evening of June 14th. 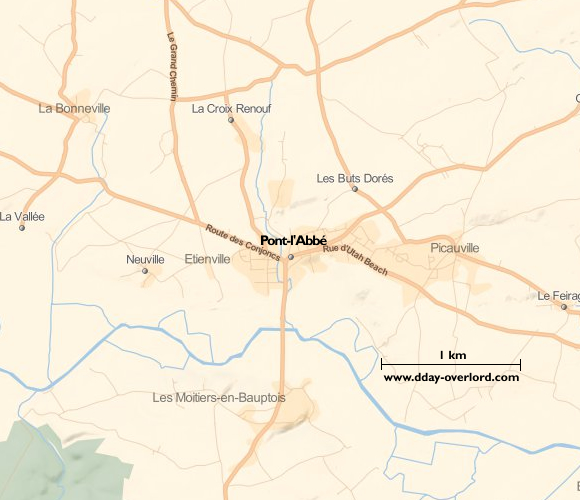