Port-en-Bessin in 1944 – Calvados – Battle of Normandy

In the spring of 1944, the town of Port-en-Bessin was occupied by the 1st Company of the Grenadier-Regiment 726 (716. Infanterie-Division). Its fishing port is located below a large cliff that is set up for defense by the Germans. Due to its geographical situation and the difficulties of access by the coast, the Allies refused to attempt a landing in front of the commune and decided to seize it by an assault from the land. This mission was entrusted to British soldiers of the Royal Marine Commando (50th Infantry Division) commanded by Lieutenant-Colonel C. F. Phillips. After their landing on the beach of Gold, sector Jig, they must go along the coast and take assault Port-en-Bessin from the east. The municipality is also located at the border between the American and Anglo-Canadian sectors. The Allies planned to join them on D-Day. The Germans installed three strongpoints in the Port-en-Bessin area coded from Wn 56 to Wn 58. Wn 56 defends direct access to Port and is armed by a 47 mm gun Skoda Pak 36 (t) and a 47 mm gun Pak 181 (f). The Wn 58 is located on the heights west of the city and consists of a 75 mm barrel FK235 (b) under casemate.

On June 6, 1944, at 9:30 am, the landing did not proceed as planned for the British commandos who suffered very heavy losses. Delays in the planned schedules are accumulating and the Royal Marine Commando reaches the heights of Mount Cavalier, located south-east of Port-en-Bessin, only at nightfall. Although exhausted by the fighting of the day and their long march, the commandos launched several patrols in the direction of the city to define the outline of the German defensive system. They also recovered German war material to supplement the losses recorded during the disembarkation phase and since the beginning of the progression.

In the afternoon of June 7, 1944, the infiltration of the English in the eastern part of Port-en-Bessin was carried out with the support of Allied fighter-bombers and the navy off the coast. The German resistance was concentrated to the west of the commune and when one of the commando sections began the progression along the cliff to the west of the city, the Germans violently engaged the fight: two German gunboats, anti-aircraft gunboats, opened fire with their machine guns and caused heavy casualties: 11 commandos were killed and 14 others wounded in a few minutes. Meanwhile, the Germans counterattack on the heights of Mount Cavalier, where elements belonging to the staff of the Royal Marine Commando are stationed: some are taken prisoner, others are able to withdraw. The situation seems desperate: isolated, lacking ammunition and supplies, the English must quickly find a solution if they want to avoid defeat.

One of the unit commanders, Captain Terence Cousins, only 22 years old, discovers a trench from the inner harbor that allows to reach the heights east of Port-en-Bessin, where the Germans have reclaimed and defended the area from several bunkers. Accompanied by 25 commandos led by Captain Vincent and Lieutenant Stickings, he infiltrated it and at nightfall it reached the summit where the half-section was taken under the fire of one of the bunkers; Captain Cousins, wearing his green beret, ordered the column to stop and then rushed to the assault of the opposing position with four English soldiers: Arthur Delap (armed with his Bren machine gun), Howe, Madden and Tomlinson. They rush to the assault, shouting, opening fire with all their weapons. Supported by the firing of his four commandos, Cousins ​​forces a barbed wire barrier which blocks access to the entrance of the bunker but a German grenade falls near the captain and wounds him mortally, also touching Madden. The waiting commandos immediately mounted the assault through the overturn to the German intrenched position. The fighting continued until about midnight and resulted in the surrender of the Germans: the taking of this support ensures the control of the heights of the town. The English of the Royal Marine Commando 47 still had to fight during the rest of the night to seize the entire commune of Port-en-Bessin. In the early morning of June 8, 1944, the city was finally liberated and the commandos succeeded on the same day in linking up with the American soldiers.

Two days later, on 10 June 1944, Port-en-Bessin was visited by the commander-in-chief of the Allied ground troops during Operation Overlord, British General Bernard Montgomery. He speaks for a few minutes with the inhabitants of the commune.

Immediately after the fighting, the Allies began work to rehabilitate the port following the destruction caused by the fighting and the sabotage carried out by the German soldiers. The aim is to carry out landings of equipment and supplies, but also to set up a pipeline system in accordance with the PLUTO (Pipe-Line Underwater Transport of Oil) plan: as of June 9, the Allies begin The installation of the first elements of the Minor System which, in conjunction with those also installed at Sainte-Honorine-des-Pertes, supply fuel reserves that are positioned at Mont Cauvin, northeast of Etréham. The outer harbor is organized in such a way that the Americans work in the west while the British take account of the east in order to facilitate the operations. Two pipes, 15.24 cm (6 inches) in diameter and one kilometer in length, are installed in the port and oil tankers can unload their fuel by connecting pipelines to their cargo holds: up to 1,000 tons of fuel are delivered daily. The first deliveries were made on June 16, 1944 (two days after the Port-en-Bessin port was repaired) and the dismantling of the installations began on October 10, 1944.

The port experienced a peak of activity after the storm of June 19-21, 1944, which put the United States artificial port Mulberry A in Omaha Beach out of order: many transport ships were indeed diverted to Port-en-Bessin to unload their valuable cargoes in order to continue the refueling operations of the troops. 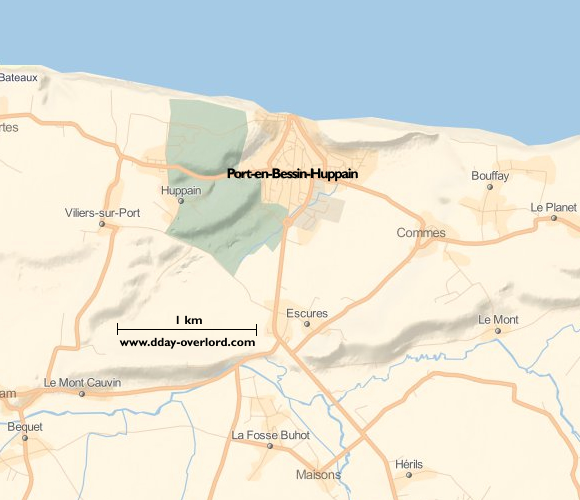