On June 12, 1944, 23-year-old Flying Officer John Alexander Inglis, flying a Typhoon 1b MN 252 fighter from the 193 Squadron (146 Wing, 84th Group, 2nd Tactical Air Force), was shot down by German anti-aircraft defense and crashed to the south-east of the commune of Potigny.

At the dawn of August 11, 1944, the Anglo-Canadians put an end to Operation Totalize, which aimed to pierce the front to the south-east of Caen in the direction of Falaise. They are only one kilometer from Potigny and overlook the region from the heights of the coast at point 195, northwest of the village. The Canadians, reinforced by the 1st Polish armored division (1 Dywizja Pancerna), resumed the progression from daybreak but this one is slow and difficult, the Germans defending the sector with fierceness. In order to break the new line of defense, the Allies decided to develop a new large-scale offensive, called Operation Tractable. Armored noises and troop movements in the direction of the front line are noticed by German advanced observers who suspect their opponents of relaunching the offensive very soon. The Allies renew major air raids on 12 and 13 August. These assumptions were confirmed on the night of August 13-14, 1944 when a Canadian officer, who lost himself on his way to the command post, crossed the German lines and was killed: he had a copy of General Simonds for the next day’s attack.

On August 14, 1944, at dawn, the Germans stood ready to contain the Canadian assault. But no sign of advance was reported by the outposts and there was no aerial bombardment: was the message found on the Canadian officer’s body a forgery intended to deceive the 89. Infantry Division Defends Potigny, reinforced by elements of the 12. SS Panzer-Division “Hitlerjugend”? The Germans did not wait long to get an answer: at noon, 800 bombers Halifax and Lancaster dropped 3,700 tons of bombs on German positions, mainly in the Potigny area, but this time again on some allied positions: 400 Canadian soldiers And Polish are put out of action in the first few seconds of the Tractable operation following the bombing errors. However, the troops under General Crerar set off and stormed the opposing positions, bypassing the town of Potigny in the northeast and making a turning movement in order to quickly melt on Falaise. The 1st Polish Armored Division, under the orders of General Stanislaw Maczek, reached the outskirts of the village in the early afternoon and engaged the fight against the German infantrymen. Potigny is finally released and the elements of the 89. Infanterie-Division fold back towards Falaise. 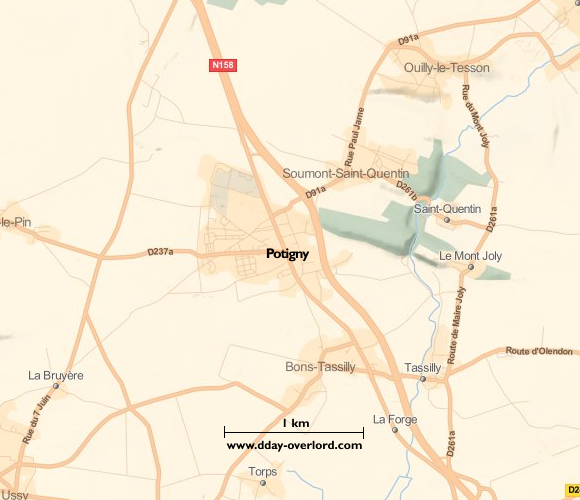