Quettreville-sur-Sienne in 1944 – Manche – Battle of Normandy

Following Operation Cobra launched on July 24, 1944, the Americans permanently pierced the front to the south of Cotentin. With the support of the air force, they speed up the German forces, which hurriedly retreated to prevent them from reorganizing.

On July 29, the 6th Armored Division commanded by Major General Robert W. Grow set up his command post at Coutances and deployed his reconnaissance unit in a southerly direction. In the early hours of July 30, the 86th Cavalry Armored Reconnaissance Squadron, which illuminates the progress of Combat Command B, enters Quettreville-sur-Sienne and takes hold of it. The Germans, disorganized, are incapable of opposing any particular resistance.

In the early hours of 7 August 1944, when it was still dark, an air combat took place between a Mosquito aircraft registered NGMM 621 belonging to the 604th Squadron (148th Wing, 85th Group, 2nd Tactical Air Command) Messerschmitt Bf 110G-4 driven by the Feldwebel Günther Zimmermann. Initially touched by the opposing fighter and then by anti-aircraft defense, the Mosquito piloted by Flying Lieutenant John C. I. Hooper and Flying Officer Sydney C. Hubbard made a forced landing on the lands of Quettreville-sur-Sienne. One is killed instantly and the other, seriously wounded, manages to escape from the cockpit and tries, leaning against the cabin of the plane, to administer first aid with the first aid kit. He died a few moments later and the bodies of the two pilots were found by the inhabitants at dawn.

On 20 August 1944, the commune of Quettreville-sur-Sienne was visited by General de Gaulle, who was traveling between Coutances and Avranches. He stops at the Place du Château and takes a crowd before continuing his journey. 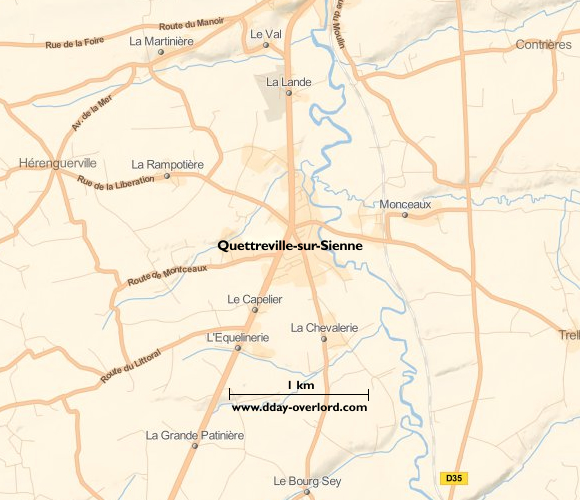