After the capture of the commune of Carrouges by the 2nd armored division of General Leclerc on August 13, 1944, the 3rd Armored Division commanded by Brigadier General Maurice Rose progresses along the departmental 909 in the direction of Rânes. But the Americans are slowed down at Joué-du-Bois and around 6:30 pm, a detachment commanded by Captain Nicholas D. Carpenter belonging to the command company of the 1st Battalion of the 32nd Armored Regiment goes to attack Ranes well That the supply and reinforcement lines of Task Force “X” (commanded by Colonel Leander L. Doan, commander of the 32nd Armored Regiment of the 3rd Armored Division) are not secured. The Americans are nevertheless supported by hunters who are looking for opportunity targets. But the Germans, in a defensive position, counterattack and inflict heavy losses on their opponents, remaining masters of the village for the night.

On August 14, 1944 at 8 am, the Americans renewed the offensive to seize Ranes. At the same time, the Germans also go on the attack and the captain. Carpenter decides to personally conduct a reconnaissance of the outskirts of the village to define the adverse device. Accompanied by Lieutenant Heiss of Squadron G, he made prisoners but was smashed by German bullets a few moments later. Killed, he is abandoned on the spot while Lieutenant Heiss, captured, manages to escape the same day. Elements of the SS Panzer-Division “Leibstandarte Adolf Hitler” and 9. SS Panzer-Division “Hohenstaufen” launch several assaults against Rânes but without success. A total of 12 US soldiers were killed during the fighting day in the Ranes area. But it was not until August 15 that the village finally fell into the hands of the Americans.

The commune of Rânes is heavily affected by the fighting (it is destroyed to almost 80%) and 45 of its inhabitants were killed during the multiple bombings.

Mid-August 1944: a tank destroyer Tank Destroyer M10 belonging to the 702nd Tank Destroyer Battalion of the 3rd Armored Division at the crossroads of La Bruyère in the area of Rânes. Photo: US National Archives. 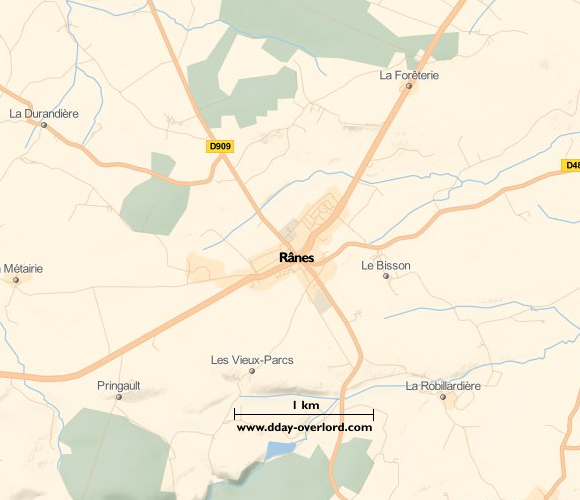