In the spring of 1944, the village of Ravenoville was occupied by the 4th company of the Oberleutnant Werner belonging to the Grenadier-Regiment 919 (709 Infantry Division). The commune is situated to the north of the head of the bridge that the Allies want to install in the Cotentin on D-Day.

Although Ravenoville is more than three kilometers north of US-designated “A” jump zone for the 502nd Parachute Infantry Regiment (101st Airborne Division), several sticks of this regiment land in the immediate vicinity of the village at First hours of June 6, 1944, victims of navigational errors by pilots who are hampered by the firing of German antiaircraft artillery. During the night and the morning of June 6th, the junior commander of the 3rd Battalion of the 502nd Parachute Infantry Regiment (PIR), Major John P. Stopka, gathers all the isolated elements near Ravenoville. These paratroopers guided by Stopka attack a farm (formerly of the Marmion family) south of Ravenoville, which was turned into a fulcrum by the Germans to control the crossroads between departmental roads 14 and 15. They kill six soldiers and make 24 prisoners and then moved into the buildings. Lost or isolated paratroopers reinforce the position: these men belong mainly to the 1st battalion of the 506th PIR (1/506th) and the 2nd battalion of the 502nd PIR (2/502nd), but Stopka also gathers men from the 3/502nd, 2/506th, battery A of the 377th Parachute Field Artillery Battalion and the 508th PIR (82nd Airborne Division). They defended themselves against several German attacks before retreating the next day in direction of Sainte-Marie-du-Mont.

On June 7, 1944, the 1st Battalion of the 22nd Infantry Regiment (4th Infantry Division) began its offensive from the northern outskirts of Saint-Germain-de-Varreville and reached Ravenoville in the late afternoon. Reconnaissance is carried out by elements of the 3rd battalion to the place of the Ravenoville Châlet on the beach, where the Wn 103 strongpoint (also known as Stp 12) is located. This site is defended along the dunes by an anti-tank wall; Its main armament consists of a 88 mm gun under casemate H612 with a headlight on the roof and a 50 mm gun under casemate derived from the Regelbau H667 type, the orientation of which makes it possible to beat by fire the beach in succession, to the north and South. Bombed by the Allied navy guns on D-Day, soldiers are still there when the Americans seize it, but they initially refuse to surrender. After a few negotiations, 82 German soldiers surrendered.

On the evening of June 7, the 1st Battalion of the 22nd Infantry Regiment was located about one kilometer north of Ravenoville, and the Americans were cleaning the beach where three pockets of resistance still operate (at Hamel de Cruttes, Ravenoville and about one kilometer north of the Châlet), they were neutralized only on June 12 by the 1st Battalion of the 39th Infantry Regiment (9th Infantry Division). 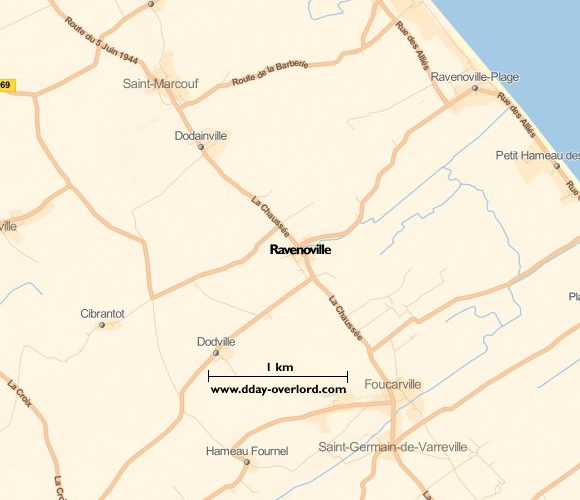