Robehomme in 1944 – Calvados – Battle of Normandy

The town of Robehomme in Calvados is located west of the marshes of the Dives. The Germans occupying the area belong to the 4th Company of the 642 Ost Battalion integrated into the 4th Battalion Grenadier-Regiment 736 of the 716. Infantry Division.

The Allies want to secure the left flank of their bridgehead by destroying several bridges on the Dives and Divette rivers and then retreating to the required crossing points holding it firmly against possible German counterattacks. The 3rd Para Brigade of the 6th Airborne Division is responsible for the mission in the early hours of 6 June 1944 and B Company 1st Canadian Parachute Battalion receives such an order to destroy a bridge over the Dives with the help of sappers.

The Canadian parachutists are dropped from 00h57 above the drop zone area coded “V” by the Allies, is located west of Varaville. The fifth section commanded by Lieutenant Norman Toseland, parachuted about three kilometers from its drop zone, is then guided in the night by a Frenchwoman to their objective. At the bridge, the paratroopers meet Major C. Fuller, commander of the company B but no explosive is available, the sappers not yet arrived with their equipment. They decide to wait for them, but at three o’clock in the morning, they change their plan to complete the mission. The initiative then takes over and Sergeant Poole of the 3rd Parachute Squadron Royal Engineers retrieves the No. 82 Gammon Bomb grenades from the soldiers to create a detonation sufficient to destroy the bridge. The explosion damages the bridge but does not destroy it. The engineers on the orders of Lt. Jack Inman, delayed by the dropping errors and the difficulties of crossing in the swamps of the Dives, manage finally to reach the bridge shortly before six o’clock in the morning and destroy it. The paratroopers then retreat to Le Mesnil.

During the following weeks, the front does not evolve and it was necessary to wait for the launching of the Paddle operation in August 1944 so that the situation changes. This offensive directed towards the Seine begins on the night of August 16 to 17 and the No. 6 Commando (1st Special Service Brigade) seizes Robehomme without major fights from August 17. 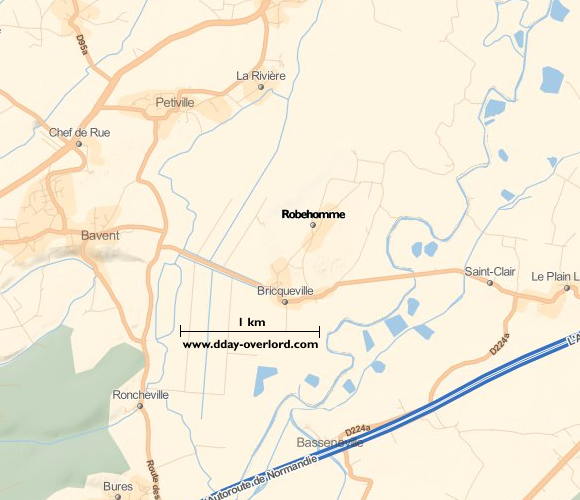