On July 28, 1944, the Americans continued to exploit the breakthrough of Operation Cobra in the Cotentin and pierced the front in the direction of Avranches.

On the same day, the 7th German Army ordered its Cotentin units to retreat on the same line further south to Percy (15 kilometers south-east of Roncey), linking the villages of Bréhal and Cérences. This line is called the “Weisse Linie” (“white line”). The two objectives are to avoid the encirclement by the American forces and to establish the connection with the reinforcements present in front of the British.

But even before this withdrawal began, many German soldiers belonging to the 84th Corps were surrounded in the area of ​​Roncey by the 2nd and 3rd American armored divisions. The units trapped are remnants of the 2. S. Panzer-Division Das Reich, 91. Luftlande Division and 17. S.S. Panzergrenadier Division “Götz von Berlichingen”. Columns of vehicles try to escape the encirclement and head towards Coutances but it is too late. Three American divisions attack the pocket of Roncey and silence it by violent bombardments.

In particular, the Americans appeal to the 2nd Air Force Tactical Air Force (Royal Air Force) fighter bombers to attack enemy armor concentrations. During the afternoon of July 29th, the Typhoon fighters belonging to No. 121 Wing of the No. 83 Group made 99 sorties to the Roncey pocket sector, destroying 17 tanks and putting 27 others out of service. Only one Typhoon, affected by debris in flight, must make an emergency landing.

Almost 1,500 German soldiers are put out of action and another 4,000 are taken prisoners. 500 vehicles, including many heavy tanks, are destroyed.

On July 30, 1944, Roncey’s pocket was under control and the village was fully liberated. 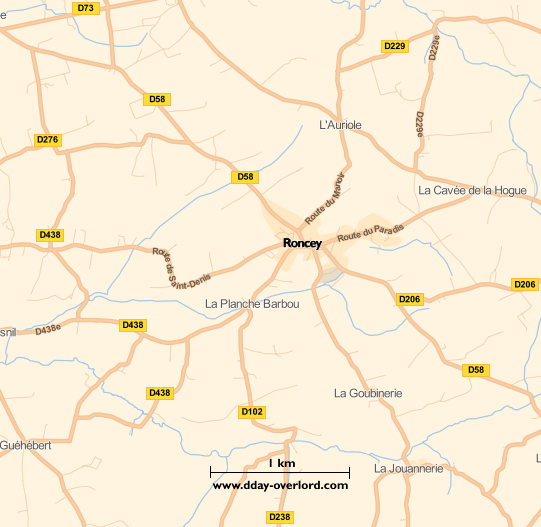